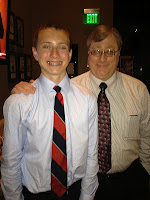 In culmination of a two year program, Jack was confirmed at Good Shepherd Catholic Church. Sharon's brother Tim was Jack's sponsor. Tom and Becky joined us.

The Bishop of the Diocese of Sacramento--Jaime Soto--presided over the Mass. It was a large group; there were almost 150 kids. In spite of the size of the group, I thought that the Bishop did a nice job connecting with each kid. The Mass lasted over an hour and 45 minutes.