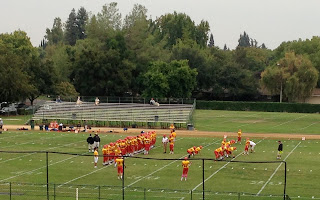 Playing their seventh game of the season, the Jesuit Marauders faced the Folsom Bulldogs at Jesuit High School. This was their second Delta River League game.

The Marauders played well in the first half. Leading by the score of 13 to 7 with 1:30 left in the first half, Jesuit went for it on 4 and 2 from their own 30 yard line. They didn't get the first down. The Bulldogs took advantage of the short field to score with 10 second left in the half and take a 14 to 13 lead.

Folsom got their passing game going in the second half. They completed a number of long passes for first downs and scored twice to lead by the score of 28 to 13. Conversely, Jesuit couldn't get their ground game on track. Their best running back continues to struggle with a high ankle sprain.

With less than two minutes to go in the game, the Marauders went for it on a 4 and 20 from their own 20. The quarterback was sacked and Folsom took over on the Jesuit 8 yard line. They scored to make the score 34 to 13.

The Marauders lost the game by the score of 34 to 13. The game was much closer than the score. If you take away the two Folsom touchdowns at the end of the first and second halts when the Marauders choose not to punt, the score could have easily been 21 to 13. Additionally, the Marauders had a 95 yard touchdown run called back due to a clipping penalty.

The Jesuit Marauders frosh football team now have a record of 4 wins and 3 losses. The game log is here.