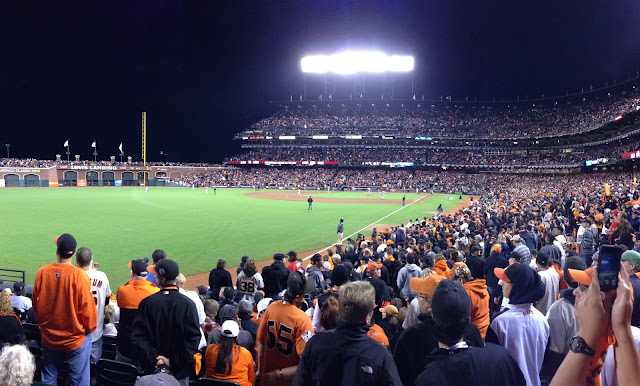 Sharon, Jack and I went to game one of the National League Championship Series between the San Francisco Giants and the St. Louis Cardinals. Jack is a Cardinals fan. We have talked for the last week that if the Cards and Giants ended up facing each other, we would try to go to one of the games; Jack has never seen the Cards play in person. When the Cards won on Friday night, we made a quick decision to go on Sunday night. I got seats from Stubhub [lower box 135, row 19, seats 4, 5 and 6].

This is the first time the previous two World Series winners are facing off in the postseason since the 1958 World Series between the Braves and Yankees.

It was an entertaining game. The Cards scored two runs in the top of the second when David Freese homered to left. I was amazed at how hard Freese hit the ball; it was a line drive. The Cards scored four more in the top of the fourth capped by a Carlos Beltran home run and chased Bumgarner. The Giants came back to score four of their own in the bottom of the fourth to make the game interesting. Lincecum pitched two scoreless innings of relief for the Giants. The Giants lost the game by the score of 6 to 4.