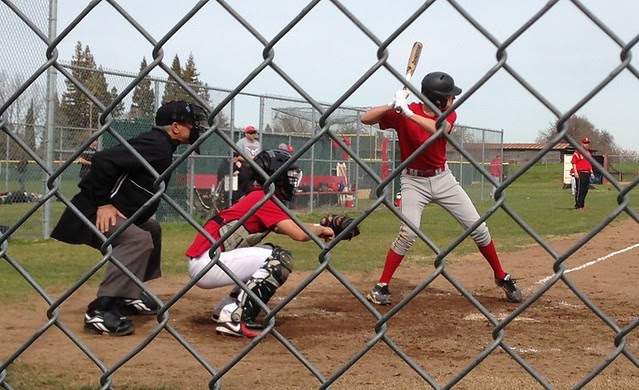 The Jesuit Marauders Frosh Baseball team scrimmaged the Bella Vista Broncos. While the Broncos had already made their final cuts down to a team of 18 players, the Marauders brought 28 boys with them. The Jesuit coaches spent the day working all of the boys into the field and the batting order.

At the plate, Jack was 0 for 2. In his first at-bat in the third inning, he popped the first pitch up to a lumbering first baseman. Jack hit the first pitch for a hard fly ball right at the right fielder in his second plate appearance in the ninth inning.

In the field, Jack played two innings at third and three innings in right field. He had one put-out and one error. In right field, Jack caught a fly ball for a put-out. At third, he charged a slow roller. Jack said after the game that he got the ball into the mitt, but kicked the mitt with his foot; the ball rolled away. Jack eventually corralled the ball and made a strong throw to first, but the runner was safe by a step or two. I charged Jack with an error.

Jesuit beat up on the Broncos in the later innings scoring seven runs in the last three innings. I had the final score as 16 to 7.

The Marauders will be working out on Monday afternoon. It is my understanding that the final cuts will be posted on Monday night to get the team down to 19 to 21 players.
By Heringer at 2/16/2013 11:55:00 PM