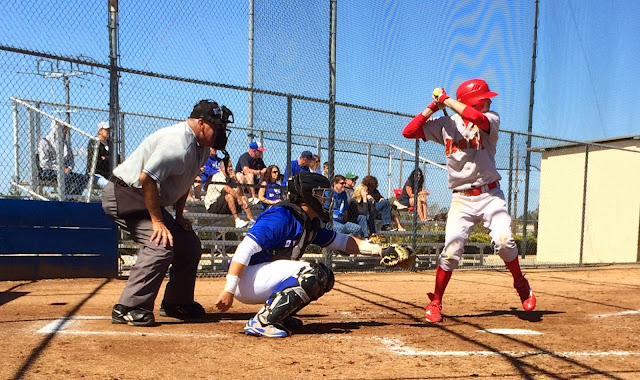 The Jesuit Marauders JV baseball team played the Folsom Bulldogs for the fourth time in the last week. Although the Marauders were leading by the score of 9 to 0 with two outs in the top of the fifth on Monday when the game was stopped due to rain, the teams had to replay the game from the beginning according to CIF section rules.

Leading off, Jack was 3 for 3 with a double, two singles and two runs scored. In his first at-bat, he hit a 1 and 2 pitch into right field for a single. Jack went to second when the right fielder misplayed the ball. He tagged up and went to third on Nick's fly out to deep center. Jack tagged up and scored on Sam's sacrifice fly to center. He hit a 0 and 2 pitch for a hard grounder through the right side in his second plate appearance. Jack went from first to third on Sam's ground ball through the left side and scored on Jack Cosca's line drive to center. In his third at-bat, he lined a 2 and 1 pitch into right center for a double. Unfortunately, Jack ended the inning there when Nick flied out to center and Sam struck out.

Playing centerfield for three innings, Jack had three put-outs. He made a very nice diving catch on a slicing line drive to right center.

The Jesuit JV baseball team now has 8 wins and 2 losses. Their league record is 2 wins and 1 loss. The game log is here. The Marauders play a three game series against the Ponderosa Bruins this week [Monday, Wednesday and Friday].
By Heringer at 4/05/2014 11:59:00 PM