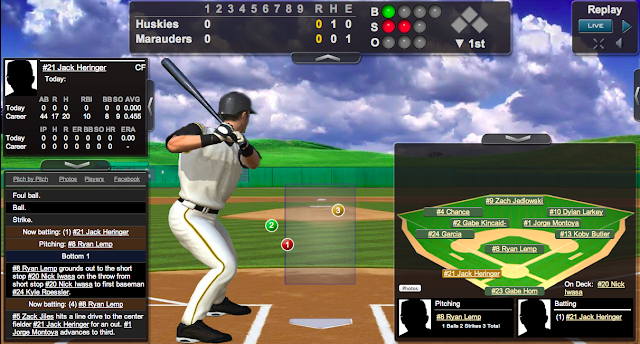 The Jesuit Marauders JV baseball team played the Sheldon Huskies. There is one player on the Huskies that Jack played with on the Outlaws: Chance. Traveling for work, Rod scored the game and I watched the gamecast.

Leading off, Jack was 2 for 3 with two singles and a run scored. In his first at-bat, he grounded a 1 and 2 pitch through the right side for a single. Jack went to second when Nick walked, to third on Alex's double play ball to the shortstop and scored on Sam's single to left field. He grounded a 2 and 2 pitch to the first base for an out in his second plate appearance. In his third at-bat, Jack lined a 0 and 1 pitch into left field for a single. He went to second on Nick's single, but the inning ended on Alex's double play ball to short.

Playing centerfield for four innings, Jack had one put-out. He is the only player on the team that has only played one position-centerfield--so far this season.

The Marauders jumped all over the Huskies. They had 18 hits; seven players had a multiple hit game. The Marauders won the game by the score of 12 to 2 in six innings. The box score is here and the scorecard is here.