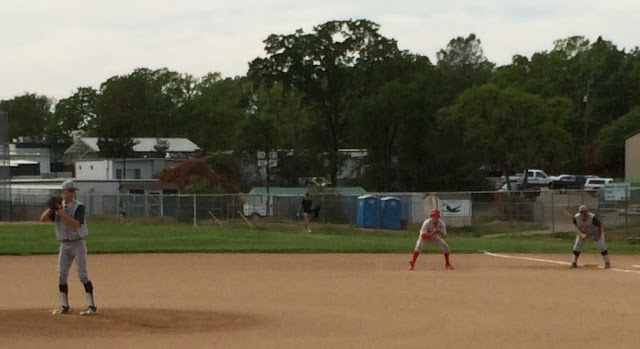 The Jesuit Marauders JV baseball game played the third game of a three game series against the Ponderosa Bruins at Ponderosa High School. The Marauders beat the Bruins by the score of 4 to 0 on Monday and 6 to 1 on Wednesday.

Batting second, Jack was 2 for 4 with two singles and two runs scored. In his first at-bat, Jack ran the count to 3 and 2, fouled off a pitch and then hit a soft line drive into right center for a single. He went from first to third on Cosca's single to right and an error by the right fielder. Jack scored on Sam's base hit through the right side. Jack grounded a 2 and 1 pitch to the shortstop and was thrown out at first in his second plate appearance. In his third at-bat, he hit a 1 and 0 pitch off the handle for a soft line drive in left field. Jack went from first to third on a grounder through the left side by Cosca. I was very surprised that he went to third and just beat the throw from left fielder to the third baseman. Jack scored on Sam's sacrifice fly to right field. Although Jack grounded out to shortstop in his fourth plate appearance, it was an interesting at-bat. He fell behind 0 and 2. Jack then fouled off a pitch, took two balls, fouled off another pitch, took another ball before grounding out on the eighth pitch of the at-bat.

Playing centerfield for seven innings, Jack had one put-out.

Scoring runs in four of the first five innings, the Marauders ground out a 7 to 2 victory. The Marauders hit 10 singles: two by Jack, two by Iwasa and three by Cosca. Jack, Cosca and Alex scored six of the seven runs; each with two runs scored. The box score is here and the scorecard is here.