AD, Cooper, Jordan and Jack
AD, Cooper and Jack played together on the Gunners team that went to Cooperstown in 2009.

AD, Cooper, Jordan and Jack played together on the Outlaws in the fall of 2009 and the spring of 2010. 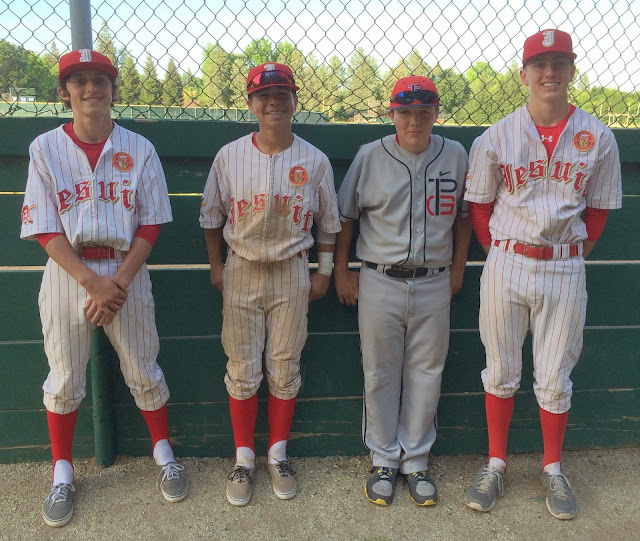 The Jesuits Marauders JV baseball team played the second game of a three game series against the Pleasant Grove Eagles. The Marauders beat the Eagles twice by the scores of 6 to 2 and 4 to 0 in a non-league doubleheader earlier in the season and by the score of 3 to 1 in the first game of the series on Monday.

Leading off, Jack was 1 for 4 with a single and an RBI. In his first at-bat, he ran the count to 3 and 2, fouled off a pitch and then struck out swinging. Coming up again in the bottom of the first inning, Jack hit a 0 and 1 pitch for a high fly ball to right for an out in his second plate appearance. In his third at-bat, he crushed a 0 and 2 pitch into left center for a hard line drive right at the centerfielder for an out. I am still more than a little confused about why the centerfielder was so far towards left center. Jack hit a 0 and 1 pitch for a hard grounder through the left side for single in his fourth plate appearance. He drove in Christian for an RBI.

Playing centerfield for seven innings, Jack had one put-out. The coaches have really shortened the rotation for these last few games. Only Cooper and Christian have been worked into the defense rotation.

On the strength of a two walks, a hit batter, four singles and Kyle's triple, the Marauders jumped on the Eagles in the bottom of the first and scored 7 runs. The Marauders ended up winning the game by the score of 11 to 1 in six innings. The box score is here and the scorecard is here.

The Jesuit JV baseball team now has 20 wins and 4 losses. Their league record is 10 wins and 1 loss. The game log is here.