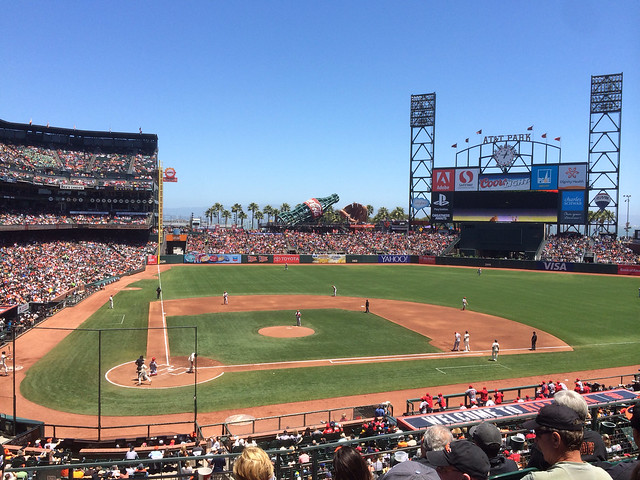 Over years, we have talked about going to see the San Francisco Giants play the St. Louis Cardinals at AT&T Park. Jack is a Cardinals fan. Except for one play-off game, it has never worked out. This year, we got everything lined up for a five day trip to the bay area. We planned to go to the Giants game and then Jack was going to a Stanford baseball camp. Unfortunately, Jack pulled his groin and will not be attending the Stanford camp.

Leaving Carmichael a little after 8:00 am, we got to the hotel before 10:00 am. We are spending two nights at the Hotel Vitale. We stayed here for a night in 2007 when we went to a Giants game. The room was actually ready.

After we got unpacked, Sharon spent some time with the concierge looking for a restaurant for Friday night. Eventually, we walked the 1.1 miles from the hotel to the ball park. The game had a 12:45 pm start time.

I brought three club level tickets in section 211. The seats were row E, seats 8, 9 and 10. We got there early and wandered through the club level before getting something to eat and settling into our seats. 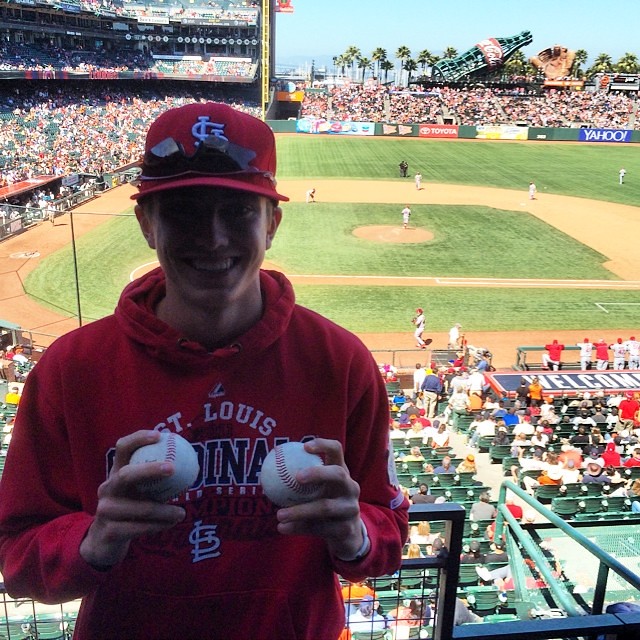 Jack ended up getting two fouls balls! The first one was off of Mark Ellis. It bounced off someone to our right and then someone behind us before Jack snatched it out of the air. The second foul ball was off of Buster Posey. It looked it was going to be below us, but went off someone's hand. It ended up in Sharon's lap and Jack grabbed it. Sharon said it hit off her neck. She was checked out by a medic, but seemed fine although a little shaken. Jack thinks that the ball must have hit off a seat back in front of us before it got to Sharon. I tried to convince Jack that getting two fouls balls was extraordinary, but he is convinced that he is going to be able to get them whenever he goes to a game!

The Giants lost the game by the score of 7 to 2. They had three players that I have never heard of starting: Tyler Colvin in left field (apparently he has played for the Cubs and the Rockies); Joe Panik at second base (a 23 year old rookie); and, Adam Duvall at first base (a 25 year old rookie). The Cardinal's shortstop hit a home run in the top of the first to give the Cardinals a 2 to 0 lead. The game never seemed close. Bumgarner was the losing pitcher.

After the game, we walked back to the hotel. Sharon and I had a bite to eat and a drink in the Americano Restaurant at the hotel.

We finished the night at Michael Mina Restaurant. On California Street, it was walking distance from the hotel, Sharon, Jack and I had a five course tasting. The solid was solid, but not spectacular. Both Sharon and I agreed afterwards that we would probably have been happier just ordering off the regular menu.
By Heringer at 7/03/2014 11:59:00 PM