Jack has missed three weeks of baseball recovering from a groin pull. In that time, the Walbeck Elite team played eight games, including batting practice against two very weak teams last weekend. I debated about taking him to the showcase that Walbeck baseball was holding in Marysville on Saturday, but decided that he needed to test his leg and face some live pitching before the tournament in Southern California at the end of the month.

Jack played center and right field during the stimulated game. He looked solid in the outfield. Jack had to chase a couple of line drives to left center. Additionally, he stayed with and caught a ball that he completely lost in the sky.

At the plate, Jack looked out of sync. For the showcase, they started the count at 1 and 1. In his first at-bat, Jack struck out looking on an outside pitch. He grounded a ball down the third base line in his second plate appearance. Jack reached base on what I would probably have scored as an error on the third baseman. In his third at-bat, he walked and then struck out swinging. If you get walked, you stay at the plate and start the count over. Jack walked again in his fourth plate appearance before striking out swinging again.

After the scrimmage, the participating colleges each introduced themselves and their program.

Walking to the car, Jack said "I hate it when I am off for a couple of weeks." He has talked in the past about how he is an in-season player. Jack does well when he is playing and working out daily. He doesn't do well when he into something from a long layoff. 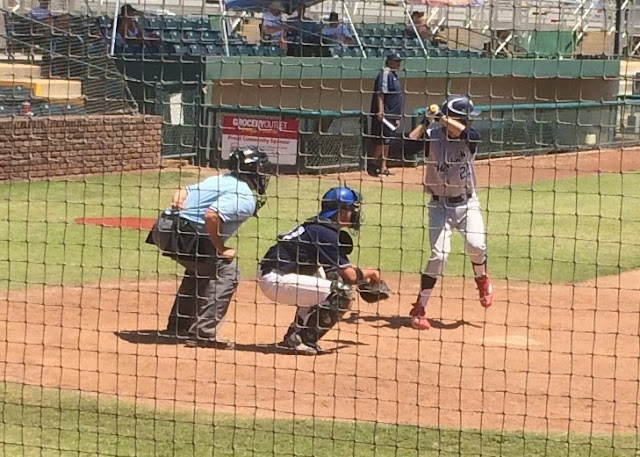