2014 Under Armour Southwest Championships 18u Day 2 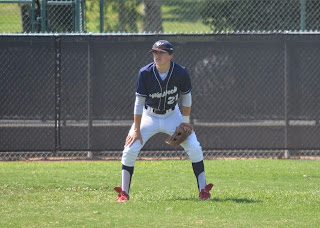 We started the day running into some of the team at Starbucks. After a quick bite, we headed to the field.

The Walbeck Elite played the MVP Red Sox in the first game of the 2014 Under Armour Southwest Championships 18u at South Hills High School at 10:30 am. The MVP Red Sox are from the Thousand Oaks area.

Batting second, Jack was 1 for 3 with a fielders choice and reached on an error. In his first at-bat, Jack ran the count to 1 and 2, fouled off a pitch and then grounded a ball to the right side. The first baseman got to the ball, but threw wildly to the pitcher covering first. Jack went to second when the shortstop made an error on a grounder by Dailey. They advanced to second and third on a passed ball, but ended the inning there when Clarke and Lee grounded out to the pitcher and to third. Jack hit a 2 and 1 pitch for a chopper up the middle in his second plate appearance. Sam was forced out at second, but Jack beat the throw to first. Leading off first, he stumbled on a ball that rolled away from the catcher and was picked off first. In his third at-bat, Jack smoked a 0 and 1 pitch for a line drive over the first baseman. Rounding first, he slipped and was thrown out at second in a close play.

Jack complained after the game about how slippery the infield was. They didn't water the infield between games.

In a close game, the Elite ended up tying the Red Sox with a score of 1 to 1. The scorebook is here.

After the game, a group of families from the team had a interesting Mexican lunch at a place called Taco Ready. Back at the hotel, I ran on the treadmill for 45 minutes and then took a dip in the pool

The plan for the evening was to meet Drew and Nicki at their new place and then walk to dinner. In the traffic, it was 50 miles and about an hour and 10 minutes. We had a very nice visit. They have a very quaint cottage. The five of us walked to Blair's Restaurant in Silverlake. It was a nice dinner. Jack had lasagna, I had grilled albacore, and Sharon had braised short ribs.
By Heringer at 7/31/2014 11:59:00 PM