I went to the Sacramento Kings versus Golden State Warriors NBA basketball game with a large group. The herd totaled twelve, including: Tomasin, David, Mikey, Dino (a friend of Tomasin's) and his son Dino, Bachman and his wife, Snipes, Keith and two of his friends and me.

With a number of people staying at the Holiday Inn Downtown, I took an Uber and met them about 5 pm. We wandered into Old Sacramento and had dinner at the La Terrazzo Mexican restaurant. Afterwards, we headed to Golden 1 Arena. 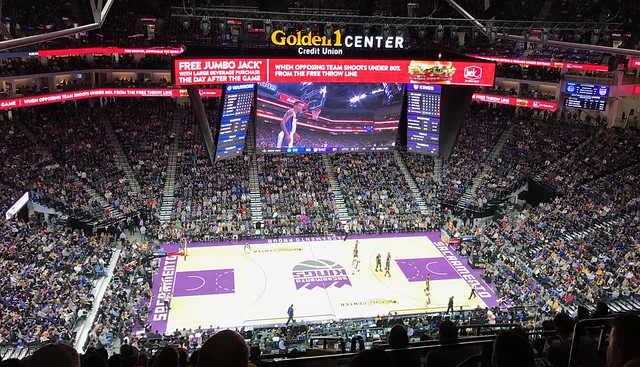 Not surprisedly, it seemed like everyone was wearing Warriors gear. Surprisedly, the Kings kept the game close. With Cousins scoring 6 of 32 points in overtime, the Kings beat the Warriors by the score of 109 to 106.

I spent about 2/3s of the game focusing on Stephen Curry. Curry was the leading scorer for the Warriors with 35 points. He was 11 for 20 from the field, 8 for 14 from three and 5 for 6 from the free throw line.

DeMarcus Cousins was the Kings' leading scorer with 32 points. He was 13 for 30 from the field, 0 for 5 from three and 6 for 6 from the free throw line. Adding 12 rebounds and 9 assists, Cousins just barely missed a triple double.

The Warriors had an off shooting night, while the Kings got 45 points from their bench. Kevin Durant was never a factor in the game; he never seemed involved in the offense.

As Tomasin noted later, the Warriors just didn't have a player to match up against Cousins. He thinks that this is going to be a problem in the playoffs.

After the game, we wandered to Sauced, a new restaurant about a block from the arena. It was packed. Tomasin and I ended up giving up trying to get served and wandered back to the Holiday Inn. Most of the group eventually joined us. I called an Uber about 12:50 am and got home about 1:15 am...
By Heringer at 2/04/2017 11:59:00 PM