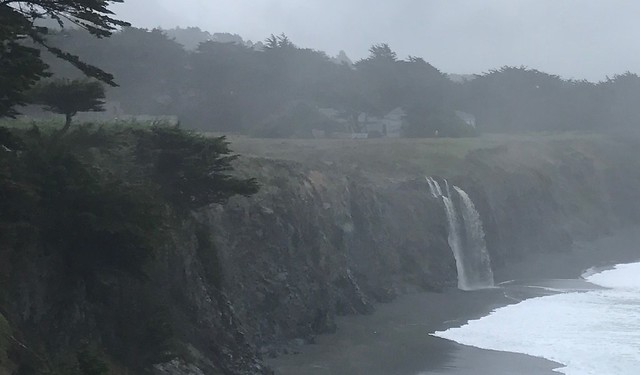 When we got up on Monday morning, there was no power. Phil said that he thought that the power had been off since about 4 am. With it raining even harder than Sunday, we made a decision to pack up and head out early.

As an aside, I was amazed how wet the whole area was. It is the first time I have seen waterfalls flowing off the bluffs.

We rolled from the house about 9:45 am. Although we talked about heading home through the Anderson Valley, after we dropped the key in Gualala, we headed south down Highway 1. We tried to stop in Jenner for lunch, but the restaurant wasn't open until noon. We ended up having lunch at the Tides Bay View Restaurant in Bodega Bay.

From Bodega Bay, we headed towards Sonona. We had to detour around a section of Valley Ford Road that was closed due to flooding. We planned to stop at Schug, but it was closed. We ended up stopping at Anaba Wines.

Heading east, Highway 121 was closed due to flooding. We had to detour north towards Sonoma before heading home. Although it was raining cats and dogs, the traffic was pretty light on the way back to Sacramento. We rolled up to the house in Carmichael about 5:40 pm.