For the first time on this trip, we set alarm. We were up and moving before 7 am. On the way to dinner last night, we noticed a trail along the creek. We went back early to hike along the Hawksbill Greenway. We ended up hiking about 2.5 miles.

After a quick stop at the Inn for some warmer clothes, we headed to the Luray Caverns. Sharon had seen a sign for the caverns when we were in Little Washington last year. We got tickets to the first tour at 9:00 am. It was extraordinary! The tour lasted about an hour. I don't think picture can do it justice. 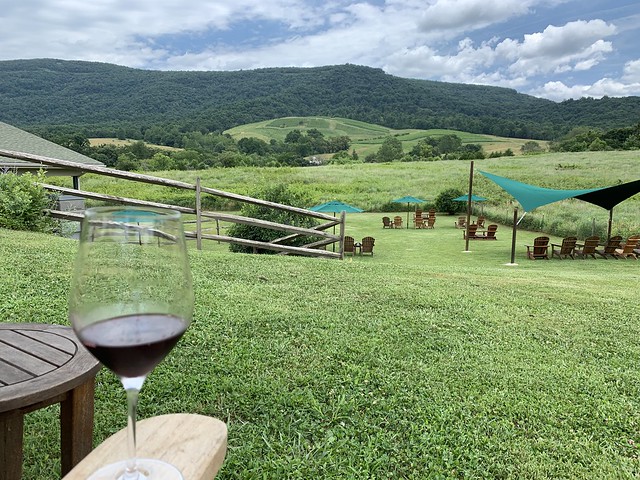 Back at the hotel, we got cleaned up and packed up the room. Sharon had seen an article in a magazine rating the Glen Manor Winery as one of the best in Virginia. We headed there for a tasting. It was very nice. The wines were good. The view was different, but probably better than at the Wolf Gap Winery on Monday.

Afterwards, we headed into Front Royal for lunch. Googling farm to fork restaurants, the Blue Wing Frog was at the top of the list. This turned out to be a swing and a miss. Although it was empty, the service was slow. The restaurant was dirty...

Sharon had a steak and blue cheese salad, while I had the Cubano sandwich. I rarely says this, but I don't recommend this restaurant.

We headed back to Washington, DC. We are spending three nights at the Georgetown Westin. I was stressed coming back into town trying to get to the hotel to get on a work conference call.

The plan for the evening was having pizza at Jack's apartment. Jack had spent the afternoon putting together the table that we bought on Ikea on Sunday. We ordered four pizzas from Dominos. The group included the CEO [Seo] and CFO [Emily] from The Corp.