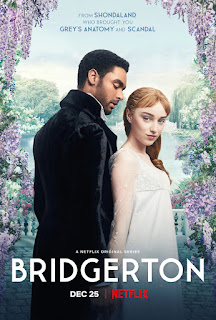 After seeing Regé-Jean Page host Saturday night live in February, we watched Bridgerton on the AppleTV on Netflix. We banged out the eight episode series in less than two weeks in early March.

Bridgerton is a period drama series created by Chris Van Dusen and produced by Shonda Rhimes. It is based on Julia Quinn's novels set in the competitive world of Regency era London's ton during the season when debutantes are presented at court. Unlike the series of novels, Bridgerton is set in an alternate history with a racially integrated London where people of color are members of the ton, including some with titles granted by the sovereign.

Bridgerton premiered on Netflix on December 25, 2020. With a viewership of 82 million households, it has become the most-watched series on Netflix. In January 2021, the series was renewed for a second season.