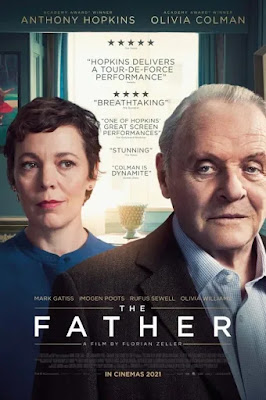 The film was co-written and directed by Florian Zeller. It is based on Zeller's 2012 play Le Père. A French-British co-production, the film stars Anthony Hopkins, Olivia Colman, Mark Gatiss, Imogen Poots, Rufus Sewell and Olivia Williams.

The plot follows an aging man who must deal with his progressing memory loss. It is a devastating portrayal of dementia.

Although I don't think that it will win best picture, this may be my favorite movie of this year's Oscar nominated films that we have seen so far. It is extremely well done. I recommend it.

Watching other people struggle with aging parents, I have repeatedly told myself that I would let the kids do what they thought was best for me. This is probably easier said than done. Nevertheless, it is something that I am going to try and carry as a core value.
By Heringer at 3/27/2021 11:59:00 PM