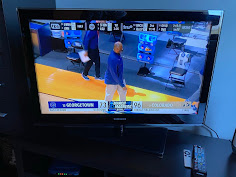 In what seems like a lifetime ago, Jack, Sophia, Sharon and I saw Georgetown play De Paul during Senior Parent Weekend last February. With Georgetown winning the Big East Tournament, making the NCAA Basketball Touranment for the first time since 2015 and snapping the program's longest tournament drought in the modern era, I decided to watch their first round NCAA Tournament Basketball game against Colorado. Georgetown was a twelve seed, while Colorado was seeded fifth in the East Region.

Qudus Wahab was Georgetown's leading scorer. He had 20 points on 7 for 12 from the field and 6 for 9 from the free throw line. Wahab also had 12 rebounds.