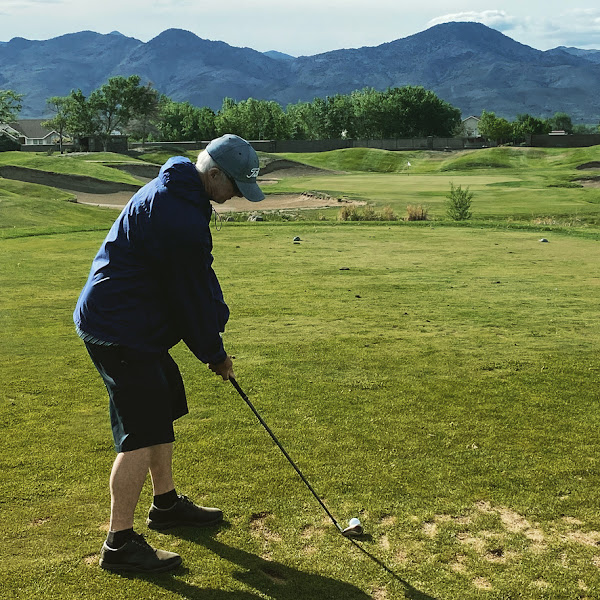 Larkin and I were both up and moving pretty early. As we were trying to figure out where to have breakfast, Kevin texted me that they were heading to Pegs Ham n Eggs. We walked there and had pancakes and eggs.

After breakfast, we wandered to a Big 5. With the weather forecast predicting thunderstorms and rain for the afternoon, I bought a rain jacket.

As we were walking back to the hotel, we ran into Rod in the parking lot. He was taking off to Chico for Cooper's graduation. I only saw Rod twice very briefly over course of the two days.

About 10:30 am, we headed to the Dayton Valley Country Club for a 12 pm start time. We played this course once before in 2016. We were supposed to play with Brian and Hiroaki. They jumped over to play with a couple of other guys and we ended up with Manuel and Mario. They were cousins, but I am still not sure how they are connected to the group (Rueben?).

I was pretty happy with how I played. Using a shamble format, I ended up with a 99. The scorecard is here. We used my drive on four of the first five holes. Thankfully, although it was windy, we never got any rain. It got warmer and less windy over the last four or five holes.

After taking a quick shower, Larkin and I wandered over to the Casino Fandago. The group dinner was held in one of the large buffet areas. We ended up sitting with Kevin, Rick, Art and Colin. I had mahi mahi for dinner. There was mass confusion over the scoring and the closet to the pin winners.

I finished the night playing poker with Kevin et al for about an hour and a half in Art and Colin's room. Larkin wandered off fairly early, while Rick dropped out of the game after about an hour. It was after 11:30 pm by the time I crashed.
By Heringer at 5/15/2021 11:59:00 PM