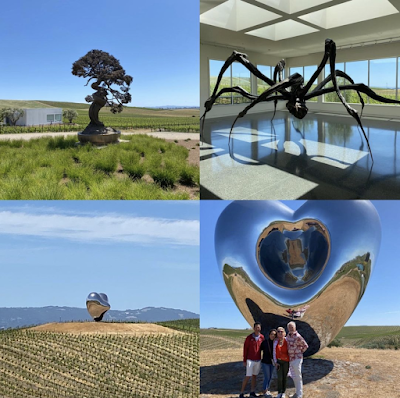 After our planned Sea Ranch trip in January was cancelled due to Sonoma County Coronavirus restrictions, we booked a house for the Mother's Day weekend. Having dinner with Holly and Van after golf in February, we invited them to join us.

Rolling from Carmichael about 9:15 am, we met the Wongs at Donum for a wine tasting. We did the Explore tasting. We did this tasting with Jack in November of 2019. It is a fabulous experience that includes an ATV tour of the art collection and a tasting in a small building along a pond. We have talked about bringing some other couples like the Gainsleys and the Larkins for the same tasting.

From there we headed to the Tides Market in Bogeta Bay. We had sandwiches on the picnic tables. Sharon had made muffaletta sandwiches. It has become somewhat of a tradition for Sharon to make these sandwiches to eat on the way to Sea Ranch. After lunch, Sharon bought some smoked salmon.

We rolled into Gualala just after 4:30 pm to pick up the key. Meeting the Wongs at the house, we spent some time unloading the vehicles and getting settled. We are spending four nights at Sea Haven. While we have never stayed at this house before, Graham View is two properties to the North, while Crestview is three properties to the south.

After getting settled in to the house, the four of us walked south along the bluffs past the Sea Pine and Walk On Beaches. We ended up hiking 3.7 miles in just over an hour and a half.

We finished the day with a late dinner of lasagna and salad. Sharon making a lsasnga for the first night dinner at Sea Ranch has also become a tradition. We finished the day talking and visiting until almost midnight.
By Heringer at 5/06/2021 11:59:00 PM