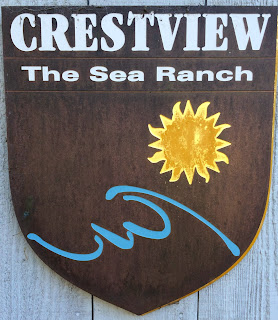 The plan for the holiday weekend is to spend a few days at Sea Ranch with Phil and Marlene. This will be the third out of the last four years [2013, 2011] that we have spent a winter weekend at Sea Ranch. After some indecision about which vehicle to take, we ended up loading everything into Phil's truck. With golf bags, ice chests and luggage for the four of us, it was quite a load.

Leaving the house a little after 10 am, we made a stop at the Bouchaine Vineyard for lunch. From there, we made stops in Bodega Bay for some smoked salmon and Jenner for gas. We rolled into The Sea Ranch about 3:15 pm, just over five hours with three stops. We are staying at the Crestview house that we rented in 2011.

After getting settled into the house, we took a long hike to the south. We went to the Walk on Beach and back. It still irks me that there is a long bypass around the bluffs just north of the Walk on Beach.

We used the hot tub and then played a couple of games of pool. When we were here three years ago with Jack, we never used the game room with the pool table.

Sharon made a lasagna last weekend. By the time we got the lasagna cooked, it was a late dinner.