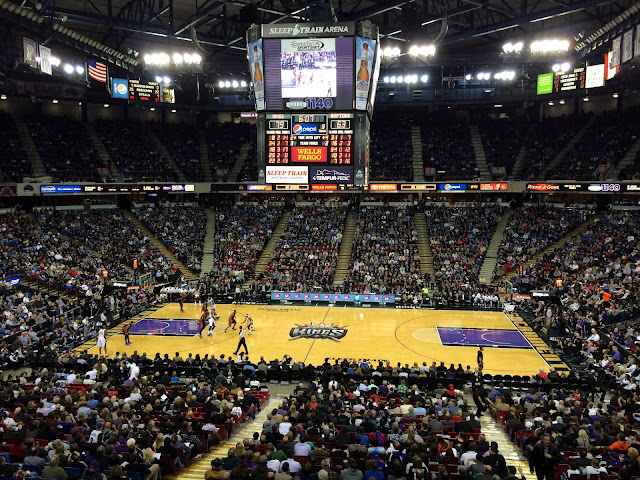 I went with Snipes to the Sacramento Kings versus Toronto Raptors NBA basketball game. The Kings led by 20 points going into the final quarter. Toronto got going offensively and cut the lead to five points with under a minute to play. The Kings held on to win by the score of 109 to 101.

The Raptors were lead by Kyle Lowry. He had 21 points on 7 for 16 from the field and 5 for 6 from the free throw line. In one of the oddest plays I have ever seen, Lowry fouled out of the game when he made a three point shot late in the game, but somehow fouled Ben McLemore in the process. I would like to see footage of the play.

The new NBA commissioner, Adam Silver, attended the game. The game was announced as a sell-out and it looked pretty close to being full.

In what both Snipes and I thought was a bizarre move, the Kings had Jimmer Fredette on the floor for a big part of the fourth quarter. When he was in the game, I focused on watching him rather than following the ball. I continue to believe that he does not have the speed and athleticism to be an NBA player. Kurt summed my feelings nicely by saying "I didn't pay money to see Jimmer Fredette finish a game!"