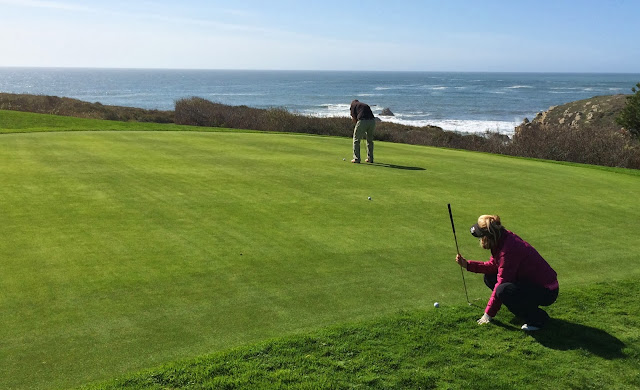 Sharon and I walked south from the house to start the morning. The roundtrip was about 2.4 miles. We walked pass the Walk-on Beach that we explored on Friday night.

The plan for the day was to play eighteen holes of golf at The Sea Ranch Golf Links. After hitting on the range, we started off the first tee about 10:25 am. It was an interesting round. I shot a very liberally scored winter rules 102: a 53 on the front nine and a 49 on the back nine. Although I felt very inconsistent, I ended up bogeying seven holes and getting a par on one of the par threes. Sharon shot a 106: 53 on the front nine and 53 on the back nine.

I felt like I couldn't string two shots together. I was struggled with the soggy conditions on a couple of the holes. The middle of several fairways were a swamp after 13 inches of rain the previous weekend.

I putted reasonably well. I had 40 putts; I three putted five greens, while I one putted the ninth. I hit the ball within about 5 1/2 feet of the pin on the par three 17th hole. I missed the birdie putt, while Phil sunk his 10 feet birdie putt.

We are playing pretty slow and let a number of groups play through. It was about 4:15 pm before we finished. The round took almost 5 hours and 45 minutes.

After golf, we headed into Gualala to pick up some steaks for dinner. We enjoyed the view and the sunset from the hot tub before cooking a late dinner.

We finished the night watching Charlie Wilson's War. Philip Seymour Hoffman was nominated for an Academy Award for Best Supporting Actor in the film. I enjoyed the film, but agree with Phil that it was a fairly superficial representation of the events.
By Heringer at 2/16/2014 11:59:00 PM