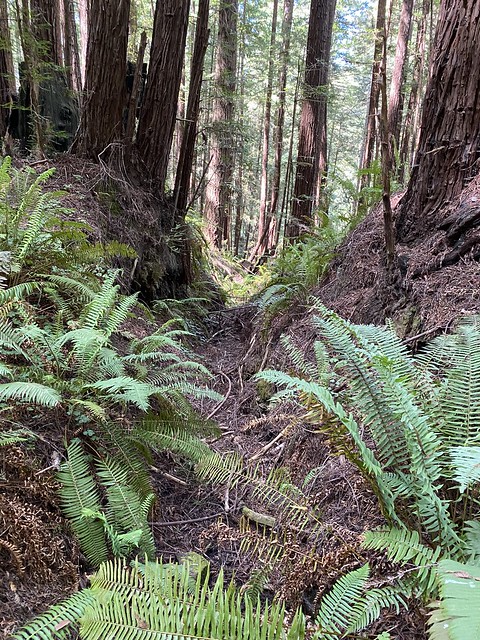 Everyone was moving very slow on Sunday morning. I eventually made a late breakfast of blueberry pancakes and bacon.

After breakfast, Sharon, Holly and I walked south along the bluffs to the Walk On Beach. We walked across the beach before looping back to the house.

Holly, Van and Sharon decided to head to the driving range to hit a couple of buckets of balls. Afterwards, they went to the Surf Market to get steaks and oysters for dinner. I went out for a run. I covered 4.75 miles in just over an hour. Staying away from the bluffs to get out of the wind, I ran through the meadows and up to Deerfield. Looping back, I ran through the Monarch Glenn Intrepetive Trail.

We spent the afternoon exploring Sea Ranch. We stopped at the Chapel. From there, we drove by the house that we are renting for Father's Day and the house that Holly and Van are renting in September. Our last stop was the San Andreas Fault Intrepetive Trail. I really enjoy this short hike; it is the third time we have walked the trail in the last year. After the short hike, we swung by lodge and the condominiums.

Van and I made a Mother's Day dinner. I barbecued oysters and baked potatoes. Van cooked the streaks sous vide. Sharon spent some time on the phone with both Drew and Jack, while Holly had calls from all three of her children.