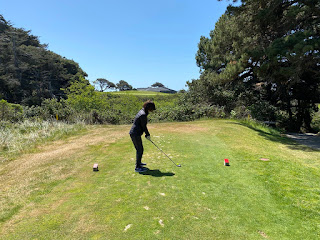 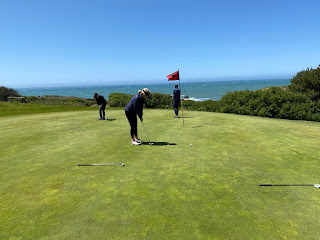 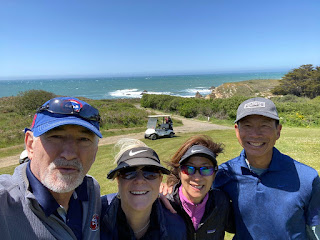 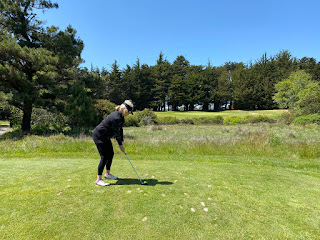 I have been hitting a golf ball for almost 50 years. I have always considered it a social activity more than a competiton. Get together with friends, have a cocktail or a beer and as Robin Williams would say knock a ball in a gopher hole with a fucked up stick.

With the plan for the day to play at the Sea Ranch Golf Links, I decided to try and take it more seriously. I wanted to see what I could do if I really tried to focus.

Unfortunately, I continue to struggle with Par 5s. The first hole at Sea Ranch is a damn Par 5. I got off to a horrible start. I was able to right the ship and actually parred the 4th hole. Hitting over the ravine on the Par 3 Eighth, I chipped up on to the green, but then three putted. On the ninth hole, I had trouble chipping. I felt like I gave away four strokes just on those two holes.

I was starting to get in a groove on the back nine. I had a par and five bogeys, but fell apart chipping on the fifteenth and the eighteenth. I gave away another four or five strokes on those two holes.

I ended up with a liberally scored 108. Given that I gave away more than eight strokes and had at least three putts lip out, I was pretty happy with the score. 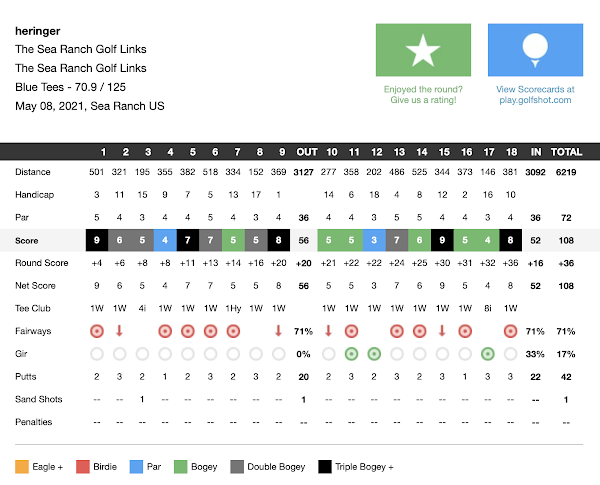 Unfortunately, Sharon struggled. Using her new clubs, she had a rough outing.

After the golf, Sharon, Holly and I hit the hot tub. Over the course of the weekend, we ended using the hot tub only once.

Van and Holly made dinner: pork tenderloin, risotto and a kale salad. We finished the night playing a couple of games of Unstable Unicorns.
By Heringer at 5/08/2021 11:59:00 PM