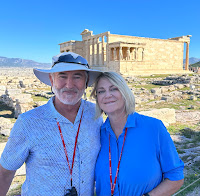 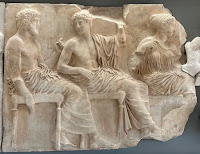 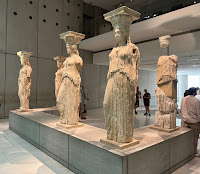 Up early, we had breakfast in the restaurant on the eighth floor of the hotel. It was interesting watching the sun rise on the Acropolis.

Walking towards the Acropolis, we met a Viator tour at the metro station at 9:30 am. We had a nice tour of the Acropolis and the Acropolis Museum; the guide did a great job. The tour guide stopped at Theatre of Dionysus, The Temple of Asclepios and the Odeon of Herodes Atticus on the way up. At the top, we wandered around the Temple of Athena Nike, the Ancient temple of Athena and the Parthenon. Although there were swarms of people, the wait was never very long at a couple of the gore points.

Following the tour of the Acropolis, we walked to the museum. The new Acropolis Museum was opened in 2009. The third floor does a fantastic job of displaying some of the artifacts. As I noted when we visited the British Museum, I am shocked at how much of the Parthenon is in the British Museum. As I said at the time, the artifacts should be in Greece, not in England!

After some confusion trying to find restaurants in the Rick Steves book, we had a late lunch at the God's Restaurant near the museum. We split a Greek salad, hummus and pita bread and Moussakas.

After the late lunch, we walked the Acropolis Loop, explored Ancient Agora and visited the Temple of Hephaistos. With tentative plans to walk Hadrian's Wall next year, we searched out the statue of Hadrian and then ran into Hadrian's library by accident.

Back at the hotel, I ran to an iStorm(?!?) to get a couple of USB-C chargers.

Walking to dinner, we had some fun trying to find a place to have a pre-dinner cocktail. Sharon originally thought there was a bar at the restaurant; there was not. We ended up at a bar at the Niki Athens Hotel.

We finished the day with dinner at 2Mazi. For starters, we spilt Wild greens pie with phyllo dough made with Carob seed flour and feta cheese mouse and Risotto with zucchini, asparagus, lemon confit and crayfish. For a main, Sharon had Guineafowl with parsnip puree, corn, graviera cheese and lemon thyme sauce, while I had Tuna with smoked eggplant, stamnangathi wild greens (Cichorium spinosum) and (kakavia) fish soup sauce. The food was solid. A group of six from Texas off a cruise ship sat near us, but that is a longer story...