Setting an alarm for 6 am, we finished packing. We had breakfast in the roof top restaurant. The view of the Arcopolis from there is amazing.

One odd note. When we came back from the museum on Tuesday, police were stationed at the front door of the hotel and we had to go through a metal detector to enter the lobby. Last night and this morning, there was a woman stationed outside the door of a room on our floor; she clearly had a fanny pack with a weapon in it. There was signage in the lobby for Munich Stra/tegy Management Consultants. Underneanth the title, it said Diplomats with an arrow to one of the meeting rooms. I was curious what was happening and who was there.

The transfer scheduled through Seabourne picked us up at 8:15 am. It took almost an hour to get to the airport. We breezed through checking the luggage and security. Our plane was coming from Newark and was running about 45 minutes late. The boarding area was a cattle car. The flight pushed back from the gate about 1:00 pm.

We upgraded all of our seats on the way home. For Athens to Newark, we had United Premium Plus. We had 21J and 21L: two seats on the right seat of the plane with an aisle and a window. The seats and the spacing were better than some of the first class seats we have had on older planes.

It was a very easy, comfortable ten hour flight. I finished reading The Acts of St. John and then watched Patton.

In Newark, we breezed through passport control. I was surprised that we didn't have to fill out an entry form and go through customs.

We grabbed some spring rolls, pot stickers and vegetable dumplings for dinner. Although we had a three and a half hour layover, it went fast.

We boarded a 7:30 pm United Flight to Sacramento. I took the same flight in December coming back from the Army/Navy game in December. We had economy plus seats. Mostly trying to sleep, I got very restless.

We were on the ground about 10:45 pm. I was shocked that our luggage beat us to baggage claim. Sharon's brother Tom picked us up and we were home before 11:30 pm.

More postings and pictures from the trip in the coming weeks... 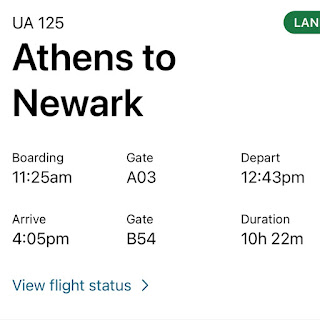 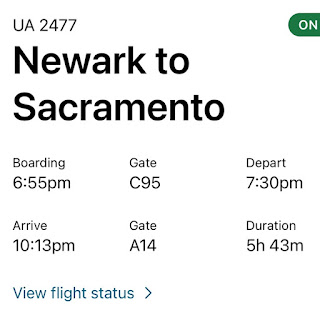