While Sharon had a massage in the morning, I continued my search for a bank to cash the travelers checks. I called the Visa Travelers Check Assistance Center in Great Britain and they suggested MetroBank.

To make a long story short, I was unsuccessful in my repeated attempts to explain to the bank’s satisfaction what AAA is (yes ma’am, it is an automobile club…). MetroBank acted like they might take VISA Travelers checks, but they did not want anything to do with ones issued by AAA.

Sharon, Jack and I had lunch at a TGI Friday’s in a mall just outside the Village of Alabang. Pat caught up with us after lunch and she and I went to an electronics store to try, without success, to find a router for her home network.

In the early afternoon, Pat, Sharon and I started back towards downtown Manila to play night golf. The traffic was very bad. Manila is a city of 10 million people and there are little or no freeways. As a result, the last half of the trip was on surface streets clogged with jeepneys, tricycles and buses.

We played night golf at the Club Intramuros Golf Course. The entire course is lighted. We teed off about 6:30 p.m. and it did not finish up until after 11:00 p.m. Here is a view from a spot on the wall overlooking the first tee.

It was very cool. You play golf along the 16th century walls of the Spanish fort in the middle of Manila. 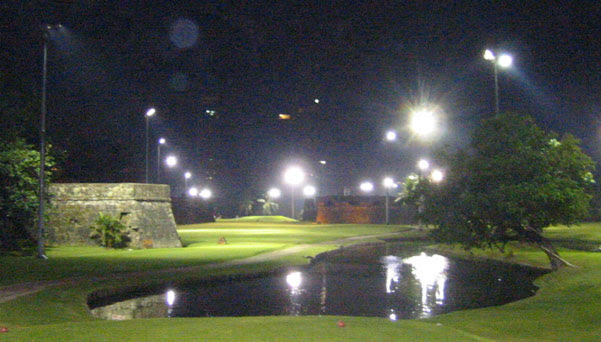 The heart of the city is around the golf course with lots of traffic on several the major streets. It was a very unique experience! Like the previous day, we had three philippino women as caddys. I got a little frustrated with the caddys because it seemed like they were not much help keeping track of where the balls had gone in the dark.