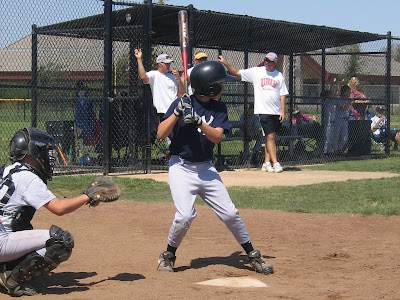 After we finished up the first football game, we headed over to Rau Park for Jack's last baseball game of the 2008 fall baseball season. We got there in the second inning. The Yankee's played the Crushers.

Jack walked twice. He walked and came around to score in his first plate appearance. In his second at-bat, Jack fell behind 1 and 2 in the count. He fouled off four pitches and eventually walked.

In the field, Jack played third, second, left and center. With the temperature over 100 degrees, you could see Jack wilting in the outfield in the last two innings. Between the football pictures, practice and game, it had already been a long day.

The Yankees won the game by a score of 13 to 6. Their record for the 2008 fall baseball season was 14 wins and 0 losses. The coach told the kids afterwards that he had played baseball at a number of levels for a long time, but had never had an undefeated season.
Posted by Heringer at 9/06/2008 10:54:00 PM