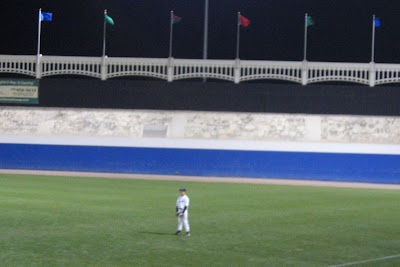 After the football game, Sharon, Jack and I took off for Big League Dreams Sport Park in Manteca to play in a tournament with the Gunners Baseball Team. This is a very unusual sports park. It includes a number of scaled-down replica stadiums, including Fenway Park, Yankee Stadium, Tiger Stadium, the Polo Grounds, Anaheim Stadium and Wrigley Field. The park is laid out with three stadiums built around a stadium club with a restaurant, bar and big screen televisions. You can see the fields from inside the Stadium Club.

The Gunners played the Visalia Lightning in Yankee Stadium in the first game. Falling behind by a score of 2 to 3 at the bottom of the first inning, the Gunners went on to win by a score of 10 to 4 in five innings.

Jack was 0 for 1 with one walk and one strike out swinging. He stole second and then got picked off second when he tried to stretch his lead. He played five innings in right field and did not handle a ball.

The Gunners played the SB Diamondbacks in Yankee Stadium in the nightcap. The kids played under the lights. The Gunners rolled to a 9 to 0 win in five innings. Jack played one inning in right field, but did not get to bat.