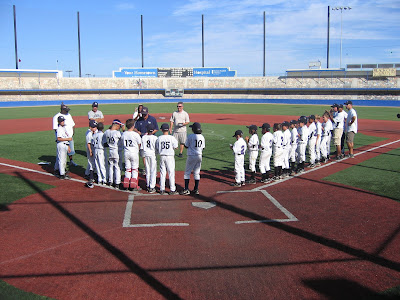 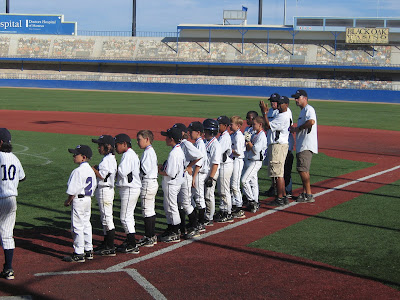 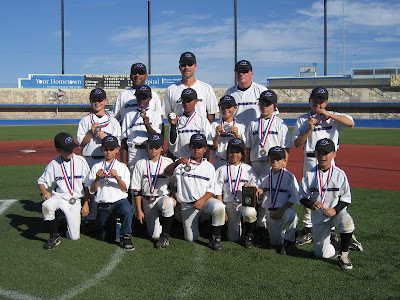 Up early, Jack and I headed back to the Manteca Big League Dreams Sports Park. The Gunners played the Lamorinda Baseball Diablos in the first game. Both the Gunners and the Diablos were undefeated on Saturday.

Falling behind 1 to 2 after the bottom of the first inning, the Gunners rallied to win by a score of 11 to 5 in five innings. Jack played one inning in left field, but did not bat.

As a result of this win, the Gunners were seated first in the championship game and the Diablos were seated second. We had to play them again in the afternoon.

In the tournament championship game, the Diablos started a big left hander. Except for two bloob singles over the head of the second baseman, the Gunners never hit anything out of the infield. They lost 12 to 2 in four innings.

Jack started in left field and played three innings in the outfield and one inning as the DH. He got up once. Jack hit a grounder down the third base line and was thrown out at first. He was on deck when the last out was made.

For the weekend, Jack was 0 for 2 with one walk and one strike out. For the two tournaments that he has played, Jack is 1 for 8 with three walks and two strike outs. He played 11 of the 19 innings this weekend and has played 23 of the 37 innings to date in left field, right field and as DH. Unless he can get his bat going, Jack is going to be stuck at the end of the bench. He is not overmatched at the plate. I think that he just needs a few more at bats and a couple of bounces of the ball.