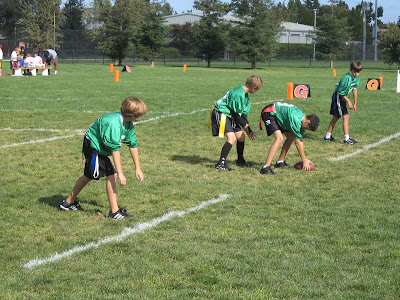 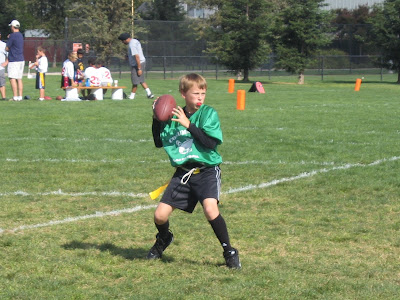 Jack played in his third flag football game of the 2008 season. Matthew, the son of the head coach for the Gunners Baseball Tournament team, was on the other team.

This is probably the best flag football game that Jack has played in the last two years. Jack played quarterback on offense during the first half. He completed 8 of 11 of his passes for one touchdown and one two point conversion. Jack also caught a pass for a two point conversion. Playing quarterback, he pitched the ball back to the running back and then ran a short pattern towards the sideline. The running back passed it back to him and Jack ran down the sideline for the conversion. He drove the team on three long drives. Towards the end of the first half, Jack scambled away from the rusher and tried to force one pass into traffic that was intercepted.

Jack's team ended up winning by a score of 36 to 12. Their record for the season is now 3 wins and 0 losses.