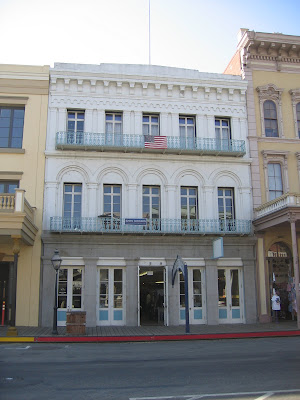 Erected in the fall of 1853, this building was occupied during 1853-1855 by Adams and Co.'s express and banking house. The Alta Telegraph Co., California State Telegraph Co., Pacific Express Co., California Stage Co., Sacramento City Bank, and Wells Fargo & Co. also had offices here in the 1850s. During May-October 1861, Wells Fargo & Co. were agents here of the western portion of the Central Overland Pony Express until it was discontinued on October 26, 1861 on completion of the transcontinental telegraph.

The Adams and Company Building was proclaimed to be the first granite facade building in Sacramento. The building facade stands substantially unaltered to this day with the interior remodeled for modern use.

With the collapse of the banking house, the building become the office of James Birch's California Combination Stage Company, which operated north to Oregon, south to Los Angeles, and east to New Orleans.
Posted by Heringer at 9/23/2008 11:59:00 PM