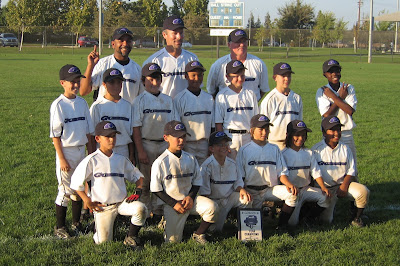 This was a long, satisfying, but more than a little frustrating day. The Gunners played in the second day of a baseball tournament at Wackford Park. After the first day of play, all of the teams were seeded into a single elimination tournament. The Gunners started the day as the #2 seed.

The first game was against the Solano Blast, one of the teams that the Gunners had beat yesterday. Leading 6 to 3, the Gunners scored 13 runs in the bottom of the third. Jack did not start, but came in as a substitute. With the bases loaded, he drove the first pitch into right center. By the time the ball stopped bouncing around the infield, the bases were empty. Jack came up a second time in the same inning and was intentionally walked. The other coach was loading the bases in order to get a force play for the third out. The Gunners won the game by a score of 19 to 3 after three innings.

The second game was against the Central Coast Whitecaps. This was probably one of the best little league baseball games I have seen; it was a very close game. Jack played designated hitter in this game. In his first at-bat, he came to the plate with two outs and runners on second and third in the second inning. Jack popped a 2 ball 1 strike pitch very high on the left side of the infield and it was caught by the shortstop. Coming to bat again in the four inning with two outs and runners on second and third, he hit a ball hard, but right at the shortstop who caught it. Leading off the sixth inning, Jack fell behind 0 and 2, took one ball and then fouled off a pitch that the catcher caught for an out.

With two outs in the bottom of the sixth and the score tied 5 to 5, the Gunners had runners on first and third. The runner at first broke for second. When the other team tried to get him, the runner at third came home. The Gunners won the game by a score of 6 to 5.

The Gunners played the CenCal 10's in the championship game of the tournament. This game quickly turned into a rout. Jack came in as a substitute in the fourth inning. He hit a 1 ball 2 strike pitch very hard, but right at the shortstop. Sitting behind home plate, I was sure it was a hit, but the shortstop stretched and speared it. Jack stayed in the game and played right field in the bottom of the fourth.

The Gunners beat the CenCal 10's by a score of 18 to 1 to win the tournament championship. Each boy got a hat, a game ball and a pin.

Although he appeared in 8 of the 13 innings that the team played on Sunday, due to the fact that he was the DH in the second game, Jack only played 1 inning in the field. He was more than a little frustrated about his lack of time in the field on Sunday. I think that Jack could help the team with his glove in the infield, but he is going to have to be more effective at the plate to get this chance.
Posted by Heringer at 9/14/2008 06:45:00 PM