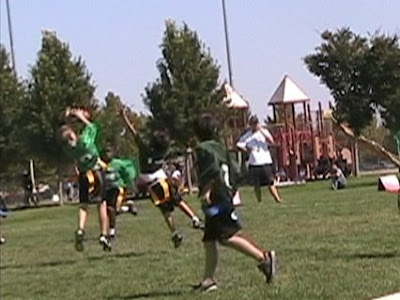 Jack jumping for an interception
The morning started early. Jack and I left the house before 8 am to get to the flag football picture day. After the pictures, the coaches had a 45 minute practice organizing the kids into two offense teams and running them through the plays.

By the time the pictures and the practice was over, we had about 30 minutes before we were scheduled to be back to warm-up for their first game.

Jack played in his first flag football game of the 2008 season. Their team is named the gators. They have ten kids on the team and can put 5 kids on the field at a time. The offensive set includes two wide recievers, a center, a running back and the quarterback. Only nine of the kids showed up for today's game. The game goes very, very fast. They play four 10 minutes quarters with a running clock.

Jack played wide receiver in one of the two offensive groups and played a variety of positions on defensive. On offensive, he caught three passes; two of the passes were for conversions after a touchdown. Jack caught all of the passes thrown to him. On defensive, he had one interception and made a number of "tackles."

Unlike last year, the team has several kids who can catch the ball. The coaches did a great job of spreading the ball around. All four of the nonquarterback players in Jack's offensive squad caught the ball and either scored a touchdown or a conversion. Jack's offensive group scored all of the team's points. I think that two of the three receivers in the other offensive group caught passes.


The Gators beat the Green Monkeys by a score of 28 to 0. Their record for the season is 1 win and 0 losses.