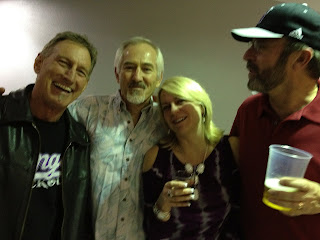 Sharon and I went to the Sacramento Kings versus Phoenix Suns basketball game. The Kings trailed from the start and lost to the Suns by the score of 98 to 84.

I frankly did not pay that much attention to the game; it was a date night for Sharon and I. When we got to the game, we wandered all the way around the arena checking out the food. At half-time, we visited with Larkin, Hunter and Snipes in the concourse. 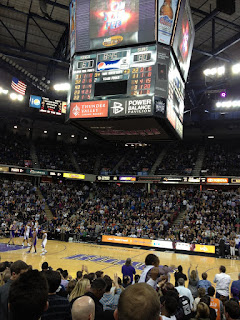 DeMarcus Cousins led the Kings with 26 points on 8 for 18 from two point range, 0 for 1 from three point range and 10 for 13 from the free throw line. He added 9 rebounds. Tyreke Evans only had 4 points on 1 for 9 from the floor.

The Suns were led by Jared Dudley. He had 20 points on 8 for 13 from two point range, 3 for 6 from three point range and 1 for 1 from the free throw line. Steve Nash only had 4 points, but added 15 assists.

I did watch Jimmer Fredette closely when he went into the game. He went 0 for 4, including 0 for 3 from three point range. I continue to be concerned that he is not an NBA player. I just don't understand what the Kings were thinking when they traded down to draft him.