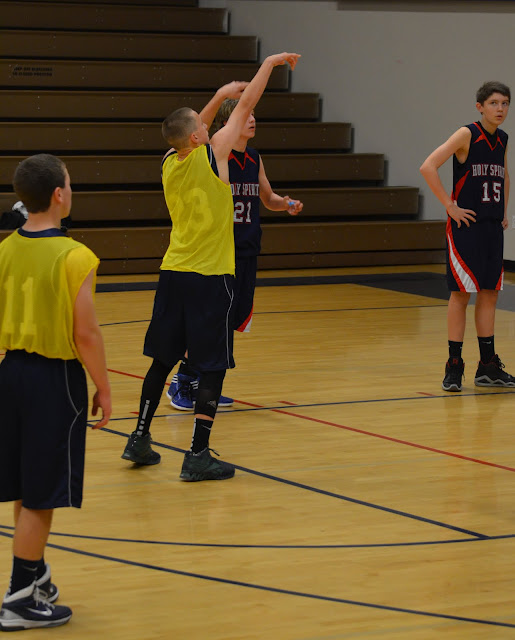 The SEAS Eagles played Holy Spirit in the second round of the Christian Brothers Basketball Tournament. SEAS beat Holy Spirit in a very competitive game in the first league game this year. Cole plays for Holy Spirit. Cole is #15 in the picture above. Cole and Jack have played baseball, flag football and basketball on the same teams and against each other for the last nine years.

With his knee improving, Jack played 22 minutes of the 28 minute game and looked much more mobile than Saturday. He had 8 points on 2 for 3 from two point range, 1 for 6 from three point range and 1 for 3 from the free throw line. Jack added 7 rebounds, one assist and one steal with one turnover and two personal fouls.

SEAS beat Holy Spirit by the score of 54 to 39. The box score is here.

The SEAS Eagles now have 10 wins and 3 losses for the season. The game log is here.

The Eagles will play their last league game against Sacred Heart on Friday and then will play SJE in the semi-finals game of the Christian Brothers Tournament on Saturday.

With basketball winding down over the next two weeks, baseball is ramping up. The Outlaws will play in their first tournament at Big League Dreams in Manteca next week. Jack will be playing in a couple of basketball and several baseball games over the three day weekend!
By Heringer at 2/12/2012 11:59:00 PM