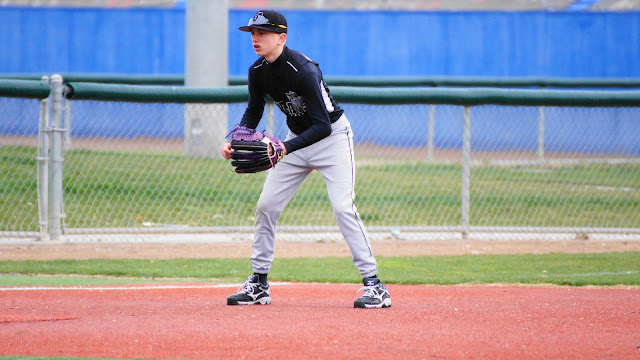 The Outlaws played in the All World Sports Weekend Warrior tournament at the Woodland Sports Complex. They played the Norcal Thunder in the first game of the tournament.

At the plate, Jack was 0 for 2 with a walk. He looks good at the plate and is making contact, but continues to hit it at someone. In his first at-bat, Jack walked on four pitches. He stole second, but ended the inning there when Johnny struck out. Jack grounded a 0 and 1 pitch to the first baseman and was out at first in his second plate appearance. In his third at-bat, he ran the count to full and then popped out to the second baseman. Jack was muttering to himself that he was just under the pitch.

In the field, Jack played seven innings at first base. He had 12 put-outs on throws from the pitcher, second baseman, the shortstop and third baseman. Jack also fielded two grounders to the right side and tagged the runner out at first himself.

In a back and forth game, the Outlaws led by the score of 3 to 2 in the bottom of the seventh. A triple and a passed ball tied the game at 3. The box score is here.

The Outlaws turned around and played the Tribe in the second game. This is not a team that the Outlaws have seen before. It often seems like Jack misses games in the early part of the season where the Outlaws romp. This time he didn't.

At the plate, Jack was 3 for 3 with a double, a triple, two runs scored and four RBIs. In his first at-bat, Jack crushed a 2 and 1 pitch into centerfield for a triple driving in Trevor. He scored on Johnny's ground out. Jack drove a 3 and 2 pitch into right center for a single and two RBIs [Bailey and Cooper] in his second plate appearance. He ended the inning there. In his third at-bat, Jack hit a 1 and 2 pitch down the first base line for a double to drive in Greysen. He went to third on the throw and scored on Johnny's single to right.

In the field, Jack played three innings at first base. He had four put-outs. Two of put-outs were extremely athletic. In the second inning, Jack was pulled off the base up the line by a throw from the shortstop; he cleanly picked the ball and tagged the runner charging up the line in the chest for the out. In the third inning, Jack made a sliding diving catch on a soft pop-up hit foul. I was sure that the ball was not going to stay in his mitt. With the mitt sliding under the ball, the ball popped up and settled back into his mitt for the out. Jack also had a put-out on a throw from the second baseman and on a ground ball hit to him on the right side.

The Outlaws exploded and won the game by the score of 15 to 0. The box score is here.