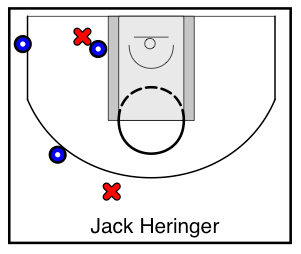 Jack twisted his knee on Friday night. Asking him how he felt, he said that he was about 70%. During the warms-up, I realized that this was optimistic. In spite of a tender knee, Jack ended up playing 21 minutes of the 28 minute game. He had 8 points on 1 for 2 from two point range and 2 for 3 from three point range. Jack added 2 rebounds, 3 assists and 4 steals with one personal foul. Jack drifted through most of the game and was clearly playing on one leg.

The Eagles ran away with the game from the opening tip. They outscored Holy Rosary 22 to 0 in the first quarter. As a measure of the difference in athleticism between the two teams, the Eagles had 24 steals against only one turnover. It looked like most of the Holy Rosary players were 7th graders...

SEAS defeated Holy Rosary by the score of 59 to 12. The box score is here. This is the Eagles largest margin of victory so far this year. The PAL league is very odd at this point. There are four or five very competitive teams [SJE, SI, OLA, SEAS and Holy Spirit] and about a dozen very weak teams.

The Eagles now have 9 wins and 3 losses for the season. The game log is here.

The Eagles will have a rematch with Holy Spirit in the second round of the Christian Brothers Basketball Tournament on Sunday.
By Heringer at 2/11/2012 04:00:00 PM