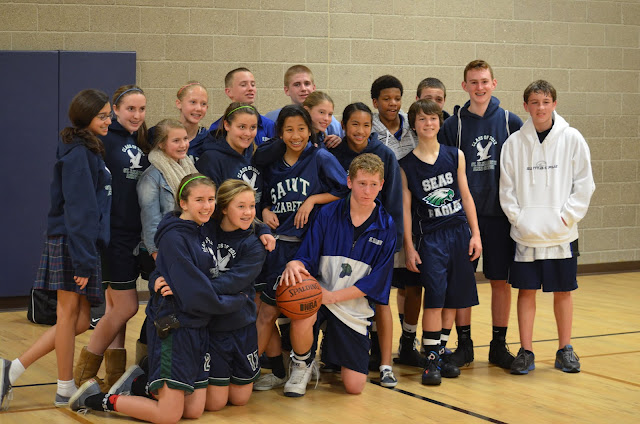 The SEAS Eagles played the Sacred Heart Panthers in the fifth and final league game of the season. The Eagles beat the Panthers in a league game last year and for the championship of the St. Philomene's tournament two years ago. While the season has five or six more games to go, this is the last game that the boys will play in their home gym.

With his knee still a little sore, Jack played 22 minutes of a 28 minute game. He scored 7 points on 2 for 4 from two point range and 1 for 2 from three point range. Jack leads the team in two and three point shooting percentage. He added 5 rebounds and 5 steals.

Going 2 for 18 from three point range in the first half, the Eagles led at half-time by the score of 30 to 17. The lead narrowed to 10 points in the third quarter before the Eagles took off. Their athleticism overwhelmed Sacred Heart and they outscored the Panthers 42 to 14 in the second half. Additionally, the Eagles shot a little better from three point range in the second half, going 5 for 11.

The Eagles beat the Panthers by the score of 72 to 31. This is the most points that the Eagles have scored in a game this season. The box score is here.

The SEAS Eagles now have 11 wins and 3 losses for the season. The game log is here.

SEAS will play SJE in the semi-final game of the Christian Brothers tournament on Saturday afternoon. The PAL Varsity Comp play-offs start the middle of next week.
By Heringer at 2/17/2012 11:59:00 PM