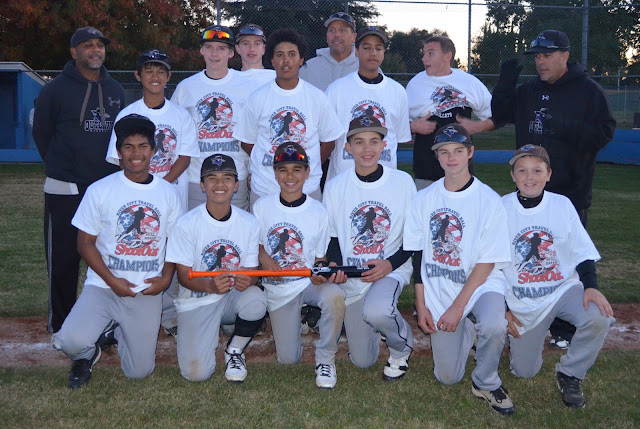 With a nice 10:15 am game time, the Outlaws were back at the Glennbrook little league field to play Bret's Muckdogs.

At the plate, Jack was 2 for 3 with a run scored and two RBIs. In his first at-bat, Jack hit a 0 and 1 pitch for a towering popup and an out to the pitcher. Jack blooped a 1 and 2 pitch into short right field in his second plate appearance. The fielder tried to make a diving catch and Jack motored to second. Jack went to third on Josh's ground out and ended the inning there on when Carlos struck out. In his third at-bat with bases loaded and no outs, Jack hit a 1 and 0 pitch for a soft fly ball into left center. Chance and Niko scored. Jack stole second, went to third on Breyton's fielders choice and scored on Bailey's single.

In the field, Jack played two innings at third, two innings at first and then caught two innings. With Trevor out for a couple months, Jordan taking the rest of the fall off and Niko only available to catch for limited meetings, Jack becomes the Outlaws third or fourth catcher! He had two put-outs and two assists. Jack made a nice play on a soft roller to the left side and threw the runner out at first for the assist. He also had an assist on a dropped third strike while he was catching, making a nice throw to first for the last out of the game. Jack had put-outs at first on throws from the pitcher and the catcher.

Behind a 87 pitch complete game by Josh, the Outlaaws beat the Muckdogs by the score of 7 to 0. The box score is here.

After getting a couple of hits and a chance to play catcher, Jack was in a whole different mood than Saturday...

At the plate, Jack was 0 for 2 with two walks, two strike-outs looking and a run scored. In his first at-bat, Jack ran the count to 3 and 2, fouled off a pitch and then drew a walk. He went to second on a wild pitch and then to third on the throw. Jack scored on a walk to Bailey. Jack struck out looking on a low inside 1 and 2 pitch in his second plate appearance. In his third at-bat, Jack walked on five pitches. He stole second. Trying to tag up on Breyton's fly out to center, Jack was thrown out at third. Unfortunately, this cost the Outlaws a run when Jack was tagged out before Cooper could cross the plate trying to tag up and score from third. Jack struck out looking on a very low and inside 0 and 2 pitch in his fourth plate appearance.

In the field, Jack played sixth innings at third base. He had one put-out and one error. Jack a nice catch on a high pop-up. He scared me by taking his eyes off the ball to check where Breyton was as he was charging down the line. On a slow rolling bunt to the left side, Jack charged it and tried to make an awkward throw to first. The runner beat the throw, but went to third on the wild throw. I charged Jack with an error.

As I have often said, baseball at every level is about pitching. The Dirty Dozen's starting pitcher (LeGrand) couldn't find the strike zone. He walked five batters. Combined with an error, a dropped third strike and a fielders choice, the Outlaws scored 6 runs before the Dirty Dozen changed pitchers and got out of the inning. Behind a solid pitching performance by Breyton and some good defense, the Outlaws held on to win by the score of 7 to 4. The box score is here.

With the win, the Outlaws won the River City Travel Ball Veterans Day Shootout tournament. Weather permitting, the Outlaws will be playing in a Northern California Travel Ball Tournament during the first week of December. Jack will be back in the cage with Coach Boyle on Wednesday.
at 11/11/2012 11:59:00 PM