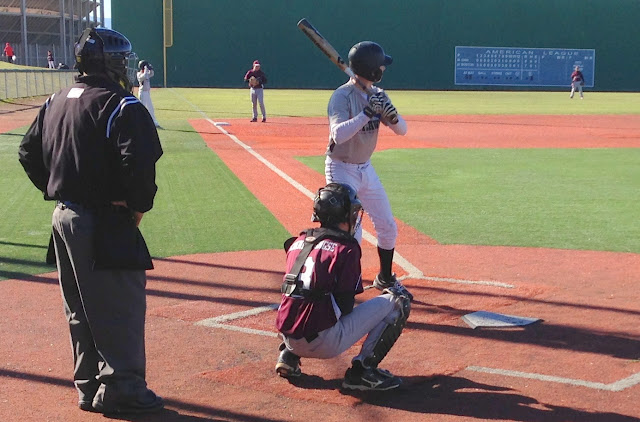 The Outlaws played in the Northern California Travel Ball First Pitch Tournament at Big League Dreams in Manteca. I had the spent the night in Windsor. Getting up before 5 am, I drove through the bay area to meet Sharon and Jack at 7 am.

The Outlaws played the East West Nationals in the first game of the day. This is not a team that they have played before. With temperatures in the low 30's, it was a clear cold morning. Tomasin harangued the night before that no one should be playing baseball this time of year.

At the plate, Jack was 0 for 2 with a run scored, an RBI, a fielder's choice and two walks. In his first at-bat, he walked on four pitches. Jack went to second on Breyton's walk, to third on JJ's single and scored on Chris' single. Jack grounded a 1 and 1 pitch back to the pitcher and was thrown out at first in his second plate appearance. In his third at-bat, Jack walked on five pitches. He stole second, but ended the inning there. With the bases loaded in his fourth plate appearance, Jack grounded a 3 and 1 pitch to the right side to drive in Cooper. Niko was forced out at second, but they were unable to double Jack up at first. He went to second on Breyton's infield single. The inning ended when Josh hit into a double play.

Leading 5 to 1 in the top of the fifth, Breyton struggled with his control and walked the first three batters. The Nationals tied up the score at 5 to 5. The game ended tied when time expired. Using one of the those screwy tie breaker formats [start the inning with no outs and runners on first and second], the Outlaws lost the game by the score of 6 to 5. The box score is here.

The Outlaws turned right around and played the Woodcreek Lobos in the second game of the day. There are a number of players on this team that used to play for the Bandits.

At the plate, Jack was 0 for 1 with two walks. In his at-bat, he walked on five pitches. Jack went to second on defensive indifference and to third on a passed ball, but ended the inning there when Josh flied out. Jack walked on six pitches in his second plate appearance. He ended the inning there when Josh popped out. In his third at-bat, Jack grounded the first pitch back to the pitcher and was thrown out at first.

In the field, Jack played six innings at third base. He had two assists. Jack handled a grounder to the left side and made the throw to first. He also had an assist on a 3-5-6 tag out of a runner stranded between second and third.

Bailey was the starting pitcher and struggled with his control. He walked two and hit three batters in the bottom of the first inning. The Lobos scored five runs before the innings was over. The Outlaws lost the game by the score of 5 to 3. The box score is here.