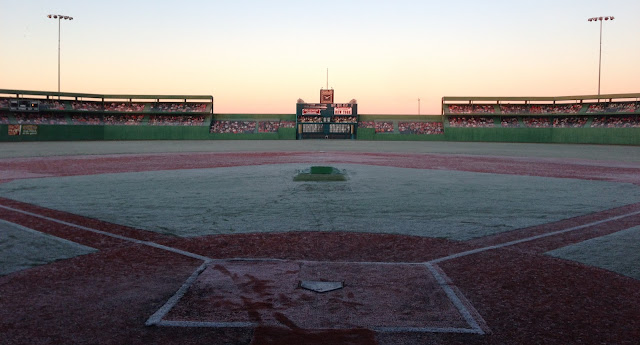 After losing two close games on Saturday, the Outlaws were back at Big League Dreams in Manteca for a 8 am elimination game on Sunday morning. It was another cold morning. The field looked like it had snow on it. The Outlaws played the Woodcreek Lobos again. They had lost to the Lobos on Saturday by the score of 5 to 3.

At the plate, Jack was 0 for 2 with a RBI, two walks and two runs scored. In his first at-bat with the bases loaded and no outs, he grounded a 0 and 1 pitch to the right side. Cooper scored from third and Jack was thrown out at first. Jack walked on four pitches in his second plate appearance. He went to second on Josh's walk and scored on Breyton's triple. In his third at-bat, Jack ran the count full and drew a walk. He stole second and scored on Josh's single. Jack grounded a 1 and 2 pitch to the left side and was thrown out by the third baseman in his fourth plate appearance.

In the field, Jack played two innings at third and three innings in centerfield. He had one put-out. Jack handled a pop-up on the left side for an out in the first inning.

The Outlaws jumped all over the Lobos and won the game by the score of 13 to 2. The box score is here.

After a two hour break, the Outlaws played Stealth. This is a team that they have seen once before, but most of the players were different.

Over the course of the weekend, it seemed like Jack didn't get very pitches to hit. In general, it seemed like the pitchers were struggling with their control in the cold weather. Jack walked six times in fourteen plate appearances. For the weekend, his on base percentage was .571 [8 for 14], but his batting average was .250 [2 for 8].

Jack finally got some pitches to hit against Stealth. At the plate, he was 2 for 3 with a RBI and his only strike-out of the weekend. In his first at-bat, Jack fell behind 0 and 2, fouled off two pitches and then lined a pitch into centerfield for a single. With the bases loaded and one out, Josh grounded into an inning ending double play. Jack lined a 1 and 1 pitch to the right side in his second plate appearance. Niko scored from third. In his third at-bat, Jack struck out looking on a 3 and 2 pitch. He, Breyton and Josh all struck out looking in the last inning.

In the field, Jack played sixth innings at third base. He had an error, two assists and three put-outs. In the third inning, Jack handled a grounder to the left side, but short hopped the throw to first. Bailey was not able to dig the throw. Although I think that Josh or Breyton would have dug out the throw, I charged Jack with an error. He handled two other grounders to the left side and threw the runner out at first. One of those was a great play on a ball hit down the third base line. Rod has some video that I will post. Jack handled a pop-up, a throw from the catcher to tag a runner going from second to third and a grounder to the left side for a force at third to get three put-outs.

The Outlaws ended up losing the game by the score of 6 to 3 and were eliminated from the tournament. The box score is here.

After almost five years of playing tournament ball with the Gunners and the Outlaws, this could be the last tournament that he plays with them. It would be interesting to try and figure out how many games, Jack has played with Cooper, Josh, Trevor and Breyton. Conditioning for the Jesuit baseball team starts on Tuesday. Try-outs start on February 4.
at 1/14/2013 11:59:00 PM