When we first started talking about taking a Hawaiian vacation, I pushed for at least a couple of nights in Honolulu. I wanted to visit Pearl Harbor.

On the way to Pearl Harbor, we made a quick stop at Leonard's Bakery for Portuguese malasadas. Sharon was not impressed with the pastry.

I was surprised how crowded Pearl Harbor was went we got to the parking lot about 9:20 am. It seems like we got the last parking spot. There were lots of cars circling the lot as we got unloaded.

I had bought tickets for the USS Arizona Memorial a couple of months ago. Picking up our tickets at will call, I overheard that tickets were already sold out for the day. After getting our tickets, Jack, Sharon and I wandered the grounds and through a couple of exhibits with an audio tour before our 10:30 am tickets.

They show about a 15 minute movie about the Japanese attack on Pearl Harbor and then loaded you up on a naval boat to take you out to the memorial. The memorial sits over the sunken USS Arizona where almost 1,000 sailors died. We got to spend about 15 minutes at the memorial before boarding a boat to head back. It was a very moving experience.

After the USS Arizona Memorial, we caught a shuttle bus to the USS Missouri. We wandered through the open areas of the Missouri. Jack and I did overnights with the cub scouts on both a submarine and an aircraft carrier. The Japanese surrendered in World War II on the deck of the Missouri.

While we were getting a bit to eat at the food truck at the USS Missouri, it start to pour. By the time we were done eating it stopped. We have been very lucky with the weather so far. It has not rained while we were out and about.

Our next stop was the Pacific Aviation Museum. Jim Dunn mentioned recently that this had been recently reopened. We toured two hangers of planes and helicopters. I was surprised how into the write-ups of the planes that Jack got. Afterwards, we caught the shuttle bus back to the entrance.

Leaving Pearl Harbor, Sharon wanted to drive up to Pu'u Ualaka'a State Wayside Park. This overlook is at 1,600 feet about Honolulu with a great 180 degree view of the coast and the city.

Getting back to the room, Sharon and I got cleaned up and had a drink and a snack at the Rumfire bar in the neighboring hotel. We finished the night driving into Chinatown and having a Chinese dinner at the Legends Seafood. Although it sounds odd to say, we were the only white people in the place... 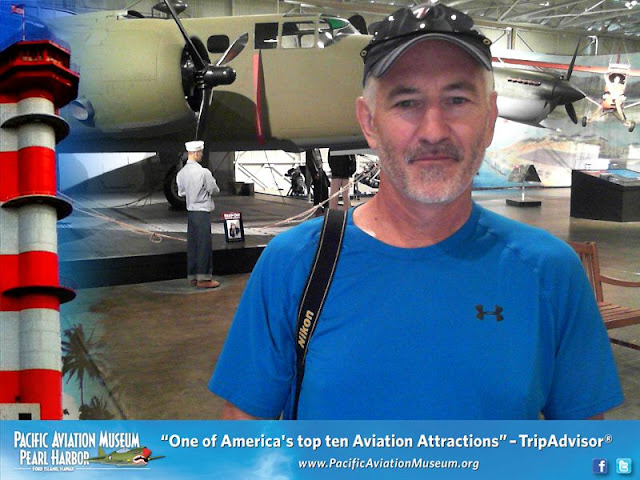