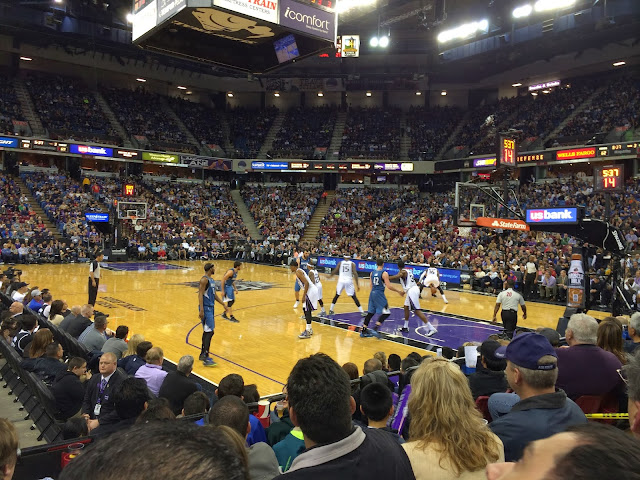 Saturday night, Sharon and I went to the Sacramento Kings versus Timberwolves NBA basketball game. Leading by the score of 56 to 53 at half-time, the Kings were outscored by 31 to 14 in the third quarter and lost by the score of 108 to 97.

This was date night for Sharon and I. We ended up spending a lot of the first half talking and trying to figure out what to have for dinner rather than focusing on the game.

Ironically, former King Kevin Martin was the leading scorer for the Timberwolves. He had 26 points on 9 for 16 from the field, 1 for 5 from three point range and 7 for 8 from the free throw line. Kevin Love had an off shooting night. He had 22 points, but was 4 for 12 from the field. Love did have 10 rebounds and 7 assists.

The Kings leading scorer was Rudy Gay. Gay had 24 points on 8 for 14 from the field, 4 for 7 from three point range and 4 for 4 from the free throw line. Cousins added 21 points and Isaiah Thomas contributed 22 points.

Kurt, Craig and Keith were also at the game.