A very early flight. I got up about 3:40 am. Sharon and I left the house at 4:25 am. To my surprise, the Southwest counter and the security line were packed with people. By the time we checked our luggage and got through security, they had already boarded the A, B and C groups of our 6 am flight. Luckily, Janie saved some us some seats!

We changed planes in Las Vegas. The flight from Las Vegas to New Orleans was delayed about 45 minutes due to a missing crew. Although we were scheduled to land in New Orleans at 2 pm, it was almost 3 pm by the time we got there. The Gainsleys landed shortly after us and we ran into them in the baggage area.

We took a taxi to the hotel. It was a zoo. We are staying at a large Marriot on Canal Street.

After getting checked in and settled in the room, we wandered into the French Quarter. We had appetizers at Tujague, the second oldest restaurant in New Orleans. We met up with the Larkin group, including Joe, Cindy, Cindy's sister and her husband and Barbie.

We had an early dinner with the core group at NOLA. This is Emeril Lagasse's restaurant in New Orleans. The food and the service was very good. I had a pork chop, while Sharon had a fish called a drum.

After dinner, we headed to Pat O'Briens, but the line was huge. We wandered down Bourbon Street and eventually found a nice table for people watching at the Bourbon Bar. We met back up with the Larkin group here.

Eventually, we wandered back up Bourbon Street. We ended the night with a nightcap at the Roosevelt Hotel before crashing. 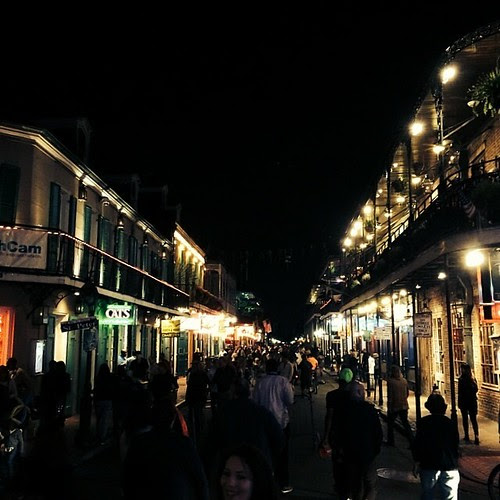