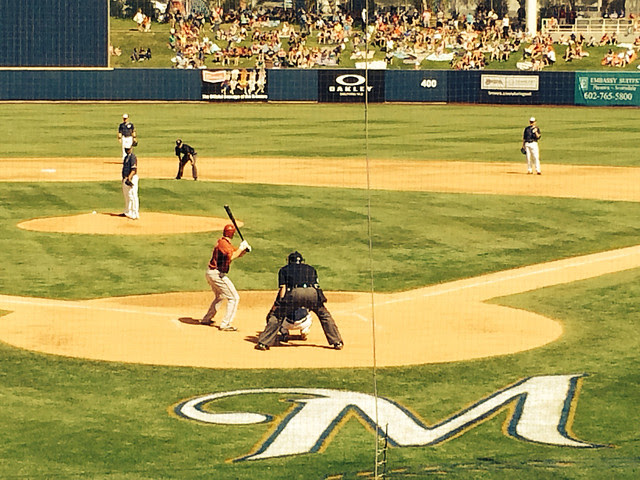 Sharon took us to the airport. We caught a 8 am flight to Phoenix. Sitting in the exit row, it was an easy comfortable flight. Due to the price of the Hertz cars, I switched to Enterprise for this trip. I miss Hertz Gold…

Once we picked up the rental car, Jack and I headed to Maryvale to see the Milwaukee Brewers play the Arizona Diamondbacks. The Brewers won the game by the score of 9 to 8 in the tenth inning. With one out and a runner on third in the bottom of the tenth, the Diamondbacks played 5 infielders and 2 outfielders in an attempt to hold the runner at third. They got a ground ball to the shortstop, but the runner beat the throw home to score the game winning run. I don't think I have ever seen a team play five infielders before. The game featured five home runs including two by Overbay, the Milwaukee first baseman.

After the game, Jack and I fought our way through the traffic back to the hotel. We are staying at a newish Courtyard Marriot on 47th near the airport; this is not a hotel that we have stayed at before.

Checking in and getting cleaned up, we then headed to downtown Tempe. Jill made a reservations for dinner at My Big Fat Greek Restaurant. Jack and I split a Margarita Pizza and a Giro platter.

Drew flew in on a late flight. We picked him up at the airport about 10:45 pm. I was amazed at the traffic mess around Terminal 4. There were cars everywhere trying to pick people up.