We spent the day exploring the French Quarter. Sharon and I met Janie and the Gainsleys and headed to Cafe Du Monte for beignets and coffee.

Afterwards, we walked along the Mississippi River towards the French Market. We wandered back down Decatur Street into Jackson Square. Sharon and I toured the St. Louis Cathedral. Scoping out the Mass times, we are planning to come back on Sunday morning.

We actually ended up connecting with the Larkins. The whole group visited the Presbytere Museum. The Presbytere houses an elaborate collection of Mardi Gras artifacts and memorabilia. It also included a special exhibit about Katrina. The first person videos of hurricane Kartina were awe inspiring. I particularly enjoyed the exhibit that allowed you the viewpoint of riding on a float in the Mardi Gras parade.

After walking through the museum, I struck out on my own and explored Jackson Square, Pirate Alley and Royal Street. Eventually, we connected back up and headed to lunch. Janie lead us to Ralph and Kacoos Seafood Restaurant. The food was fair, but the service was bad. It was probably not a place that I would have chosen…

From there, we did a walking tour of the French Quarter. We wandered up Royal Street. We kept losing Janie and Sharon as they shopped. We made a stop to regroup at Lafitte's Blacksmith Shop. Built between 1722 and 1732 by Nicolas Touze, it is reputed to be the oldest structure used as a bar in the United States. 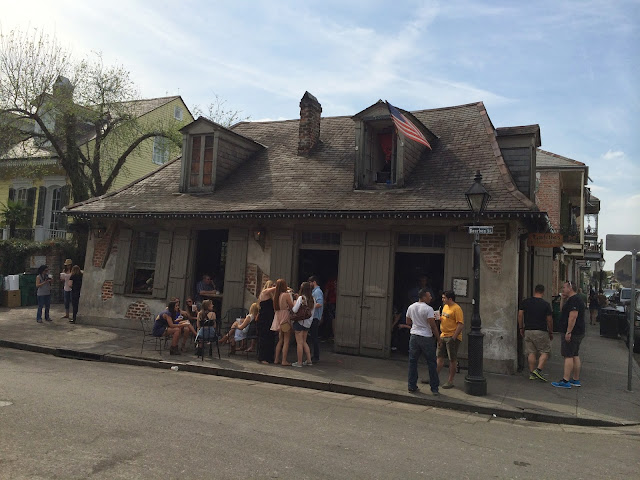 Heading back down Bourbon Street, we found our way to Pat O'Briens. Kevin and I were able to jump on a table in the courtyard. It was about this point that we realized that it was spring break for lots of the college kids! This became even more apparent on Friday and Saturday night along Bourbon Street. It was an interesting people watching experience.

We continued on the walking tour to Napoleon House. We had a light early dinner. I had jambalaya.

Sharon and I plus the Gainsleys finished the night at a different spot along Bourbon Street watching the people go by. It was about 11:30 pm by the time we got back to the room. Sharon and I spent about 30 minutes talking to Jack on the phone, including hearing about the Jesuit versus Davis JV baseball game at Raley Field. More on the game next week…
By Heringer at 3/21/2014 11:59:00 PM