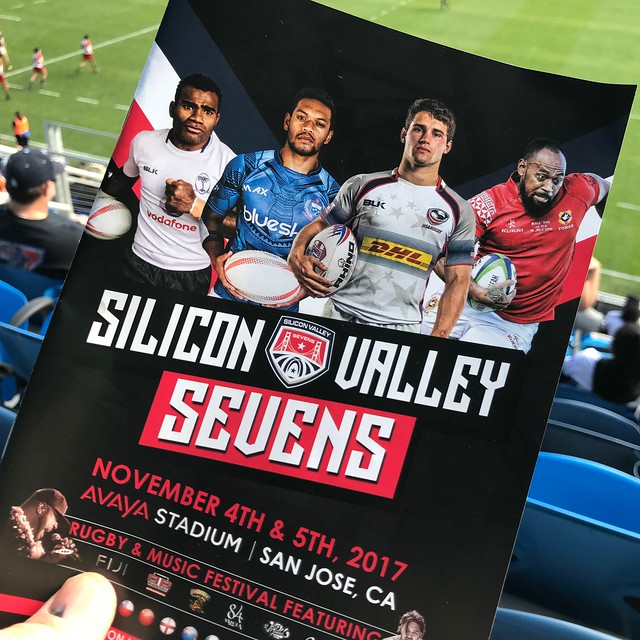 Up fairly early due to the time change (fall back), Tomasin, David and I eventually wandered to a Denny's for breakfast. I think that it was the same Denny's that we ate at with my sister and her husband three years ago... After breakfast, we headed back to the room and watched some of the Eagles versus Broncos NFL game.

We took off for the stadium about 10:45 am. After a number of consolation bracket and collegiate games, the USA played Fiji (@ 12:26 pm). They won by the score of 24 to 5 with Stephen Tomasin scoring a try.

I hung around for a couple more of the matches before heading home. I rolled back into Carmichael a little before 4:00 pm.

I always enjoy Tomasin's company. My shock for the weekend was realizing at dinner on Saturday that David is 31 years old. It doesn't seem possible. Tomasin, Nooter, Swedberg and I spent the Columbus Day weekend in October of 1986 in New Orleans. Julie and a three month old David made an appearance.

I also told Tomasin that Stephen's participation in rugby is really a legacy of his life. Tomasin continued to competitive rugby much, much longer than the rest of us. He played on a Santa Rosa division two national championship team for two years in his late 30s. David, Mikey and Stephen all had a chance to watch Tomasin play when they were teenagers. Watching him play shaped their lives.
By Heringer at 11/05/2017 11:59:00 PM