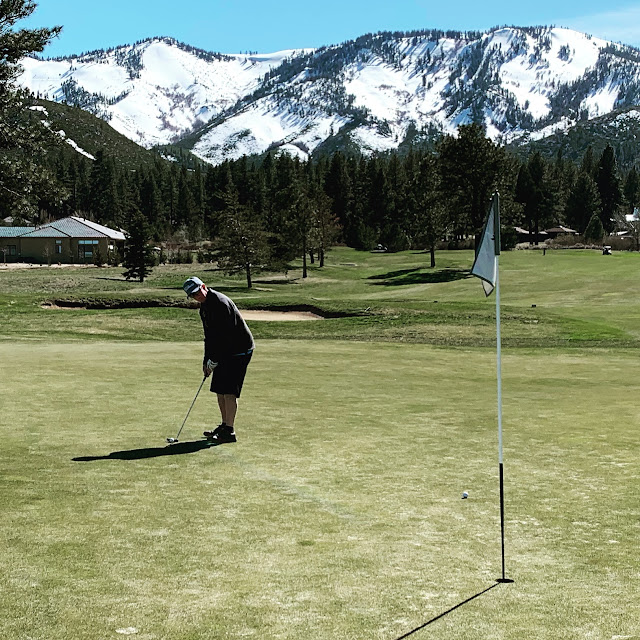 Like last year, the group was big. There were just under 60 people. The group included Gainsley, Rick, Art and Colin.

Rod started the day with a long putt contest. I won! I made the second round. I was fourth closet to the pin in the second round, but the first three missed before I sunk my four foot second putt to win.

The group teed off in a shotgun start at 12:30 pm. Larkin and I played with Ben Borja, his brother-in-law Scott and the husband of Ben's wife Lynn's best Friend (Mike).

We didn't go to the driving range. Partly as a result, I started horribly. Starting with a shotgun start on the 7th hole, I just couldn't strike the ball over the course of the first two holes. I eventually settled down and posted a 50 on the back nine. Overall, I had a liberally scored winter rules 106. The scorecard is here.

For the third year in a row, the group is staying at the Carson Valley Inn in Minden. I stayed at this hotel in a suite once in late 1991 with she-who-will-not-be-named.

Larkin and I spent some time in Rod's suite before we headed to dinner. Looking for someplace different to eat, we walked to Khristoper's Ristorante. It ended up being a very interesting evening. Before we ordered, the owner [Fred J. Simon, Jr] started talking to us. He ended up sitting at our table for the rest of the evening. Both Larkin and I had the lobster ravioli.