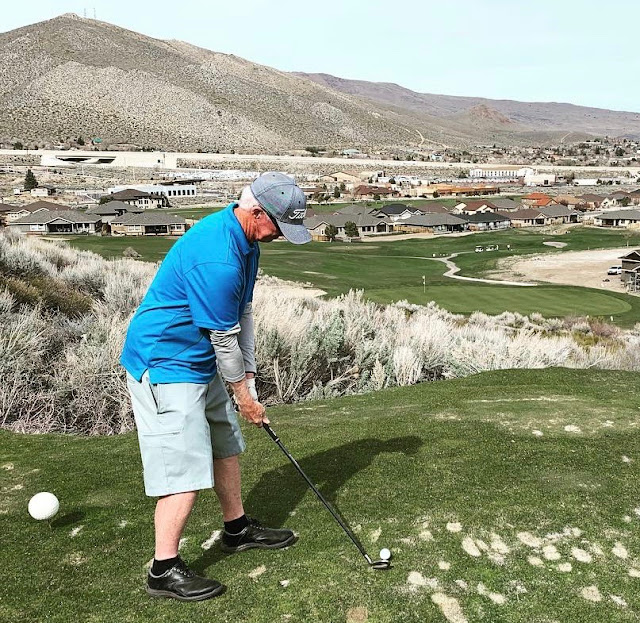 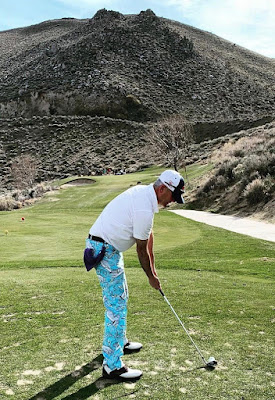 Up fairly early, Larkin and I had breakfast at Katie's Country Kitchen in the hotel. The package for the weekend included a $5.00 food voucher for use at the hotel.

Like last year, we met Gainsley and his gang at the Genoa Bar. This is billed as Nevada' oldest thirst parlor.

The plan for the day was to play the Silver Oak Golf Course. We played this course in 2010 and in the rain in 2016. Rod started with a pitching contest. This was followed by a shotgun start at 1:00 pm. The format for the day was a shamble.

Rod and I played with Rod's nephew Danny and his friend Logan. Danny was crushing the ball. On one of the par fives, he hit the ball 365 yards with the wind behind him!

As the result of Danny's drives, I ended up with a liberally scored winter rules 80!?! I have never scored that low in a shamble. Larkin had a 78, Logan had a 79 and Danny had a 68. I had fond memories of the back nine, but it includes a nasty uphill par 5 and a difficult uphill par 4.

We only used one of my drives. On the par three 16th, I hit on to the cart path above the green to the right and the ball trickled down to within 12 feet of the pin.

After golf, we headed back to the hotel and got cleaned up. The golf weekend included dinner on Saturday. There was a hosted bar from 7:30 pm to 8:30 pm with a buffet dinner at 8:15 pm. Our table at dinner included Gainsley, Rick, Art, Colin, Larkin and I.

Before dinner, they shuffled the scorecards from the day and randomly assigned foursomes. Larkin ended up winning money for the third place foursome. They also played a version of Texas Hold'em. Larkin won the hand at our table and even more money...

After dinner, Rod's brother Scott emceed. They require all of the first time attendees to get up and tell a joke. I was surprised how many new newbies there were.

After dinner, we wandered back to Rod's suite. At some point, we wandered downstairs and walked through the casino. Larkin and I crashed early.
By Heringer at 4/13/2019 11:59:00 PM